Independent TD for Donegal, Thomas Pringle, said the severe shortage of hospital beds has been raised with successive governments over decades.

The deputy also repeated his suggestion that Government employ doctors from Cuba to ease the crisis in the health service, something other European countries have already done.

Addressing the Dáil on Wednesday evening, Deputy Pringle said: “The current situation in our hospitals is devastating and completely unacceptable,” calling the overcrowding crisis, “catastrophic”.

He said: “Yesterday, Letterkenny University Hospital, in my constituency, was the second-worst affected hospital in the country, with 54 patients waiting on trolleys. I cannot imagine how stressful this situation is for those 54 people and their families. It is not only totally inhumane to have so many people left waiting for a bed, but it is also extremely dangerous. It is estimated that hundreds of people die in Ireland each year due to the overcrowding situation.

“This government and previous governments should be ashamed of themselves,” he said.

The deputy said: “The severe shortage of beds in our hospitals is not a new problem. It has been raised in this chamber every winter for decades.

“Unsurprisingly, the politicians behind the crisis have not changed either, and I think that says it all.

“The Tánaiste will remember the capacity review conducted in 2002, after which the government committed ‘to provide for an additional 3,000 acute hospital beds’.

“Despite this commitment to provide more beds, Fianna Fáil and Fine Gael governments have not only not followed through on this, but they have actually allowed the number to drop continuously over the last two decades, with a significant dip after 2008,” the deputy said.

Deputy Pringle was speaking on the Sinn Féin motion re Measures to Increase Capacity in the Health Service.

Addressing Minister Stephen Donnelly, Deputy Pringle said: “Minister, one of the things the Government always says is that the Opposition has never proposed solutions. And I have, over the last year, proposed that you look to employ Cuban doctors to alleviate the crisis within the health service, which is feasible, which is doable, which other European countries do all the time.” Portugal, Italy and Sweden have already employed Cuban doctors, he said.

Deputy Pringle said: “It’s there if you ask for it.” He said he has written to the minister on the matter but has not received a reply.

The deputy said: “That could be done, but obviously you’re not interested.” 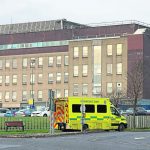 Hospital staff in Letterkenny feeling overwhelmed and burnt out – INMO