Advertisement
HomeHeadlinesSwaps laundry for golf after 50 years in business
Advertisement

LOCAL Dry Cleaner Samuel J Russell is looking forward to enjoying a well-deserved retirement after 50 years of business across Donegal. Samuel’s first job was with Cleanswell Dry Cleaning on the Main Street, Letterkenny, he had just finished school and was only 14 years old.

The business moved to the Lower Main Street after it was taken over by Joseph Kelly, it is now called the County Dry Cleaners and Laundry. Samuel thanked them for all the years of service they gave him.

Samuel then took off on his own venture, he recalled how his business was booming during the ‘80s and ‘90s, when he covered a massive area, with customers spanning out right across west Donegal.

“I covered the Gaoth Dobhair area, Dungloe, Carrigart and out to the Fanad peninsula as well,” he said.
Samuel takes pride in how he made a point of never letting his customers down. The wintry weather in recent days reminded him of some of the treacherous conditions he faced whilst holding on to that promise.

“The roads weren’t gritted then like they are now,” he laughed.

He recalled one particularly chilly night in the ‘80s when he was working in the Glencolmcille area.
“I was coming down Glengesh and I got caught in a drift in the snow, I had to leave my van behind and walk to Glenties during the night. I didn’t make it home until 3 that morning,” he said.

Samuel has really enjoyed his work throughout the years, he said every morning when he got up he looked forward to the banter he had with his customers.

He then thanked all of his loyal customers for their continued support. One customer that he has a particular soft spot for is Mrs Breege Brennan from Shallagans in Fintown, who has been one of his longest and most loyal customers.

The pandemic was a challenging time for his business as he was off the road for almost two years, he explained how it was then hard to build business back up again.

But Samuel is really looking forward to his retirement; he looks forward to enjoying some old hobbies like golfing, as he used to play many years ago when he worked with his father as a caretaker on the golf course in Letterkenny. 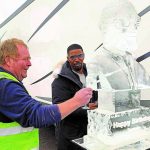 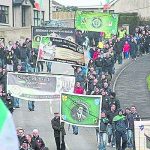