DONEGAL GAA legend Anthony Molloy is to feature as part of the latest series of TG4’s Laochra Gael.

Now on its 21st run, Laochra Gael looks back on the careers of Ireland’s greatest GAA hurlers and footballers and often unearths unexpected insights into their lives.

Set to appear in the latest series is captain turned councillor Anthony Molloy.

A spokesperson for TG4 said, “Growing up in a remote region, football was always at the centre of Anthony’s life.

“But after serious injury and a lack of success with the county, he emigrated to America in the 80s.

“When his mother fell ill, he returned home and the football enticed him back.

“He fought through the pain to bring Sam Maguire to Donegal for the first time ever in 1992. Between the celebrations and retirement however he developed a drink problem and so he embarked on a battle that continues to this day.”

“Over many years the series has built a strong following through their diverse and compelling stories of players who have helped grow the popularity of our games. I look forward to the latest series and the profiling of more influential figures from across Gaelic games.”

Laochra Gael returns on January 26 with Anthony Molloy’s episode going out on March 9 at 9.30pm. 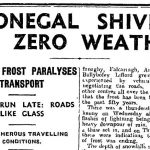 ‘The state of the roads was without parallel in living memory’