After more than four decades behind the big chair, Keadue dentist, Dr. Paddy Ferry knows the drill better than most.

Now his patients at Leith Walk Dental Practice in Edinburgh are bracing themselves for a big change in their lives as he retires following over forty-five successful years.

Paddy studied dentistry at UCD in Dublin and following his graduation in December 1976 he worked for a year as a house surgeon in the Dublin Dental Hospital before moving to Edinburgh, where he joined the Leith Walk practice as an associate dentist in 1977. He took over the practice in 1981 and has been there ever since.

Throughout his career, Paddy has provided general NHS dental care in his Leith Walk surgery, covering Leith and North Edinburgh, and also to the residents in a number of care homes in the Leith area and beyond.

Last year, the Annual Conference of the Scottish Local Dental Committees presented him with a Life Achievement Award in recognition of his forty-five years service to NHS dentistry in Lothian. They also honoured his time serving on many dental committees and serving as the BDA Branch President and chair of the BDA Council.

Despite living in Edinburgh for decades, Paddy returns to his family home in Keadue several times a year, and even with a busy life in Edinburgh, he has always kept strong roots in his homeland as a champion of the Rosses.

He was a pivotal figure in the Keadue Band for decades as the very successful leader and bandmaster and could be seen proudly leading the band year after year up and down the main street of Dungloe at various events. He was the founding chair of the Donegal Marching Bands’ Association.

Not alone did he keep the connection with the Keadue band, he has also dedicated twenty-eight years in organising the selection of the Edinburgh Mary for the Mary from Dungloe International Festival. The icing on the cake for him as an organising member was when his daughter Jemma won the Mary title in 2010. Over the years Paddy and his Edinburgh team have secured a total of four Mary titles. Heather Stewart in 1997, Kerry Sweeney ten years later in 2007, daughter Jemma in 2010, and Siobhan Dunn in 2015.

Together with his wife Fiona they are now looking forward to spending more time in Keadue and visiting old friends and neighbours there. Fiona and the couple’s children, Orla, Patrick, Jemma, and son in law Paul are all very proud of his achievements as are his grandchildren, Joseph and Iris. 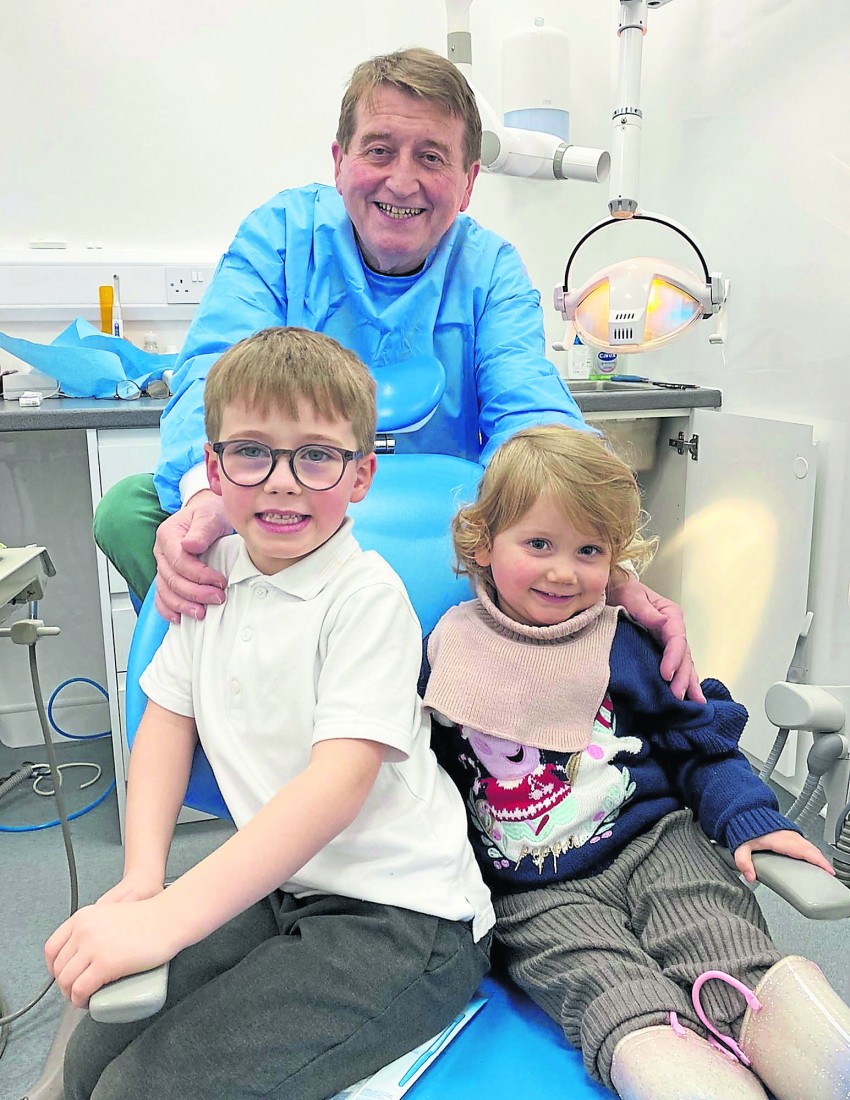 Paddy Ferry with his grandchildren, Joseph and Iris, in the dental surgery.

Speaking to the Donegal News, he said he has mixed feelings about retirement and will miss everyone.
“I will miss my colleagues who are my close friends and so many of my patients, some of whom have been patients here even before I came in 1977. Leithers are lovely people. Patients have been so appreciative of the treatment they receive. It has been such an honour and so fulfilling to serve this special community. Patients have become friends, and in some cases, four generations of families have come to this surgery which is very special,” he said.

He expressed delight that his colleague, Dr. Ruby Ahuja, is now taking over the practice.

One of Paddy’s enduring memories in Leith will be standing outside his practice when Hibs came down Leith Walk with the Scottish Cup in 2016, for the first time in 114 years.

“While not being a Hibee myself, it was a wonderful moment. I was wearing my Celtic scarf, so I fitted right in”, he said.