Paddy Carr’s first game in charge of Donegal ended in defeat as Down proved too strong in the Dr McKenna Cup opener at Pairc Esler today.

Down started brightly and a goal from Liam Kerr gave them an early advantage.

Daire Ó Baoill hit back with a three-pointer for Donegal and the sides were all square after 17 minutes.

The home side upped the ante again in the second quarter, and Conor Francis notched 1-1 as they pushed ahead.

The second half was very stop start and there were only three points in the first 25 minutes after the restart and Down grabbed two of those, while McBrearty was also on target.

However, Down finished much the stronger and scored the next three points.

Kane Barrett concluded the scoring but Down were deserving winners.

Donegal are back in action on Wednesday when they host Monaghan in MacCumhaill Park. 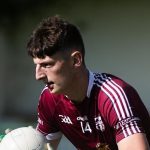 Termon see off St Eunan’s to make U21 ‘A’ Final