The New Year gets off to a flying start for music lovers on TG4 with a new performance driven music series bringing the best of music from Donegal and the surrounding areas to our screens.

Set to hit our televisions on Sunday, January 8, Féile Ealaíne na hEaragaile on TG4 combines highlights of seven concerts recorded in front of live audiences in An Grianán Theatre in Letterkenny, with specially curated intimate performances recorded in various locations around Donegal in the summer of 2022.

Donegal women are very much to the fore in the first programme from Féile Ealaíne na hEaragaile with The Sí Fiddlers taking centre stage at An Grianán.

The all-female collective came together originally for a performance at the Earagail Arts Festival and they are still going strong.
Mairéad Ní Mhaonaigh, Bríd Harper, Tara Conaghan and others from all around the county bring the best of their own regions to this powerful line-up.

Also appearing in the first programme of the series is performer and composer Belfast man Neil Martin, a regular visitor to Donegal, on cello, whistle and pipes along with Séamus Maguire.

Presenter Cathal Ó Curráin takes the opportunity to showcase his talent along with former teacher and mentor Manus Lunny and young harpist Lauren Ní Néill of Glenullin in Derry is the first of the young musicians featured in the series.

The new series continues every Sunday on TG4 at 9:30pm, bringing some really special performances from a fine array of musicians and singers. 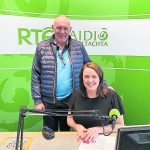