To put down on paper in this wee rhyme,

In the 50 years of (proper, Association) football which many have shared.

I made my debut in ‘seventy seven,

Went up to watch on Easter Sunday,

No boots or shin pads, but two young legs,

A brief team talk before the game,

“Step out when I tell you and remember your name”,

No set-piece plans or tactics board,

tog out behind the van at the road.

We start off well, with wee short passes,

Until we lose it in our own box,

“Cut out the fancy stuff and get the ball up the fiel’,

From Barcelona to a crowd of hashes!

After mass on Sunday we used to meet,

“Well, he looked alright after The Grill”.

One Sunday morning, heading away,

Put a big lad on to hold it up.

But poor oul’ Joe is a small bit slow, not that he’s fat,

The gaffer scowls but Joe calls back “I’m not a centre forward”,

The response is priceless – “ I can see that”. 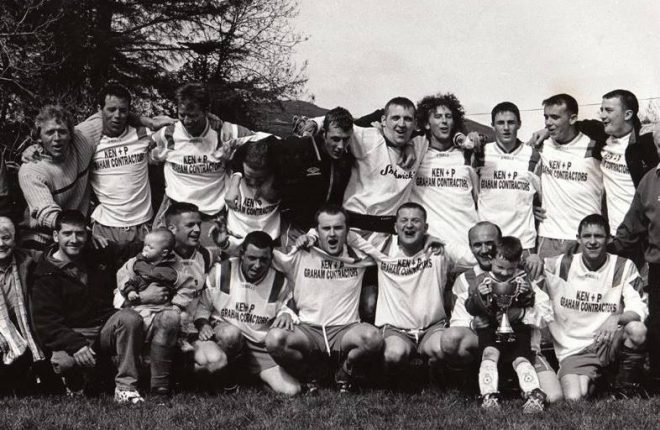 Kerrykeel who were Division Two League Champions in the 2000/01 season.

Away day trips, way out west,

The rigs are better now than they were before,

When the last man in with the smell of drink,

Got the odd socks, one of them pink,

Numbers missing turn up the next year,

At the mart or a site in Dublin 4.

“Paddy get them going”,” where’s the midfield?”,

When did talk ever win a game?

Half-time, head in for tea and a biscuit,

Talk and craic, “its bloody coul’,

We’d all do better,

A trip to Glenea is never easy,

One down and ten to go,

Ball hoofed out for a throw,

Deadly silence from their big Tom,

Five minutes left and time for the last sub,

The boy with the pink sock awakes from his slumbers,

Takes a drag from a fag and pulls off 3 jumpers,

No game for the rest, so they head for the pub!

The game is over, we crawl to the bus,

“They’re not a good team”, somebody moans,

Yet we’re beat again and nobody asks,

“What does that make us?”

The men in the middle, a tortured breed,

“Where are you getting the time ref ?” – where indeed!

The groundsman’s in bright and early,

Nets to put up and corner flags,

Touch up the lines and sweep the floor,

Does he get any credit – very rarely.

To Hospital passes in the Hospital Field,

Competing with cricket in sunny Kildrum,

And Oscar Traynor in Ballyare after dark. 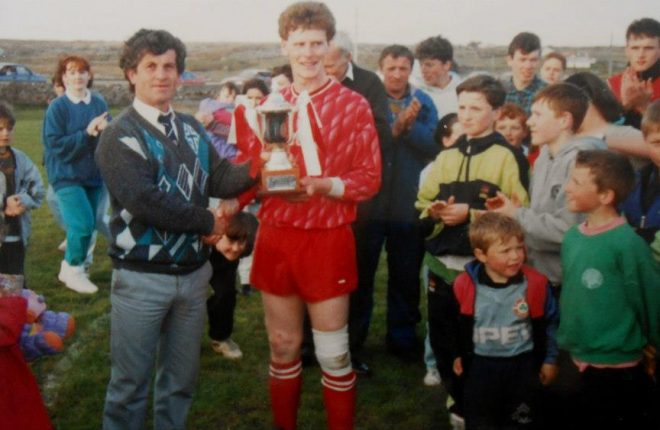 Pete Duffy of Keadue Rovers collects a trophy in the nineties from John Joe McCafferty.

Some play for the craic or to get away from the wife,

Same old faces at every club,

Sharing a love of the beautiful game,

Foes for ninety minutes, but (mostly) friends for life.

Dick Duffy and Father Mick who got it begun,

To all the others along the way,

Who kept it going up to this day.

To Christina, John Joe, the ever young Terry,

Thanks for your dedication to keep it well run.