Advertisement
HomeHeadlinesTraffic concerns in Letterkenny ahead of Christmas rush
Advertisement

LETTERKENNY retailers are expecting an influx of shoppers to rush to the shops over the next few weeks. Traditionally, December represents the best month for sales of the entire year and local businesses are looking forward to a busy Christmas, despite the concerns raised regarding traffic in the town.

Toni Forrester, the CEO of the Letterkenny Chamber of Commerce, told the Donegal News that they are very excited for another busy festive season.
“Letterkenny is open for business this Christmas, and we have got the best retail offering in the North West,” she said proudly.
The upbeat message comes despite ongoing concerns raised regarding traffic congestion in the town.
Ms Forrester said that their member businesses make a huge amount of their turnover in the next number of weeks, in the run up to Christmas.
She said the Chamber is working hard with its members to help promote the local economy and support local jobs through their ShopLK initiative. The ShopLK gift cards encourage shopping local and can be used in over 210 businesses throughout the town.

Ms Forrester explained that when people buy the gift cards for Christmas presents, they give a good boost for businesses in the new year, when people go out and spend them.
“As they can only be used in Letterkenny- this is really huge for the local economy,” she said.

Donegal County Councillors are working on motions to address the traffic congestion.

“Together we can try and mitigate this problem as best as we can,” said Ms Forrester.

At Tuesday’s Letterkenny/Milford MD Cllr Michael McBride said that the traffic in the town was “nothing short of diabolical”.
“Everyone is talking about it. If word gets out people will avoid Letterkeny at all costs. If Letterkenny traffic remains like this people will choose to go North to shop. We need to do everything possible to keep traffic moving in this town and get the message out that Letterkenny is open for business for Christmas.
“We need to look at every single junction as some traders do 40 per cent of their business between November and January. We cannot get it wrong. We will have tailbacks out the Golf Course Road and the dual carriageway. The town will be in gridlock. We have talked to the people doing the four lane work and their plans seem to be good enough. It is all about keeping traffic flowing through the town. We need to liaise with the gardai if their help would be needed at roundabouts.
“I have confidence we can do it but we have to make sure we get it right,” Cllr McBride said.

Cllr Jimmy Kavanagh supported Cllr McBride’s motion regarding Christmas traffic adding, “it is a huge problem”.
There was also a call to turn off the traffic lights at the bottom of Rosemount in an effort to alleviate ongoing problems there.
Cllr Kevin Bradley called for the lights to be synced with the lights at Justice Walsh Road, while Mayor Donal Mandy Kelly called for them to be turned off altogether.
“An assessment is being carried out of the Signals at this junction in conjunction with the Traffic Signals providers. A proposal is being prepared to carry out works to improve the efficiency of the operations of these signals which will include the construction of a loop that will detect traffic on the Rosemount Lane. We are currently seeking funding opportunities to allow this work to be carried out,” a Council spokesman said.
Seconding Cllr Bradley’s motion Mayor Donal Mandy Kelly told the meeting the matter has been raised time and time again since these lights were installed.
“The best option is to turn them off for a week and see how the traffic flows.
“I had a telephone call during the week from a man who was sitting there looking at one green light and one red light and he could not move,” Mayor Kelly said.

Roads Engineer David McElwaine told the meeting they were looking at Rosemount and ways to try and make the lights more effective.
“Turning lights off could be a safety issue. There are 241 cars coming out of Justice Walsh Road at peak times. What happens if the lights are turned off,” he added.
Cllr Bradley said he would be more inclined to use Justice Walsh Road now with the traffic lights. 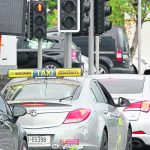