Local group ‘Into the West’ are set to launch a campaign in the hopes of reopening the ‘North West Rail Corridor’.

‘The North West Rail Corridor’ combines two former rail segments into a new corridor reconnecting most of the largest towns in west Ulster to the island’s rail network.

It is almost 60 years since trains last ran on the Great Northern line between Derry and Portadown.

That route included five stops in Donegal (Carrigans, St Johnston, Carrickmore, Porthall and Lifford) before it travelled on via Strabane, Omagh and Dungannon to Portadown and Dublin.

The line was controversially closed in 1965 in a decision that ended a century of rail access for Donegal and Tyrone and stripped the west of Ulster of most of its infrastructure.

The closure also severed a vital link between Dublin and the north-west of the island and ushered in decades of car dependency.

The railway line between Derry and Letterkenny had been previously closed in 1953, which greatly impacted the role of both towns as key transport hubs.

Since these closures two whole generations have been raised in Donegal without access to a transport mode that much of the rest of the island takes for granted.

The public’s desire to see rail return to the North-West has remained strong ever since.

The North West Rail Corridor route would see trains start in Letterkenny and travel through Derry, Strabane/Lifford, Omagh and Dungannon to Portadown, from where they would continue onwards to either Dublin or Belfast via the existing rail network.

Indicative journey times from Letterkenny via the route would be 20 minutes to Derry, 2 hours and 20 minutes to Belfast and just over 3 hours to Dublin.

Access to the rail corridor from East Donegal would be provided by a joint Strabane/Lifford station, with journey times from there to Dublin of 2 hours 30 minutes.

‘Into The West’ are holding a series of public events about the North West Rail Corridor and their campaign to reopen it in each of the main towns along the route.

Anyone interested in finding out more about the North West Rail Corridor and the campaign is encouraged to attend these free meetings.

Into The West are also calling on everyone who would like to see this vital transport corridor restored and rail returned to Donegal to visit their website (www.IntoTheWest.org) and sign their petition, which can be found on Change.org. 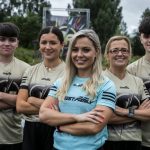