PADDY Diver has warned campaigners are prepared to “take over a government building” to house mica-affected families this Christmas who are living in “condemned” defective block homes.

The prominent campaigner was speaking to the Donegal News as campaigners and families prepare to speak at a meeting of Donegal County Council in Lifford on Monday.

“We contacted the council to request that we get a chance to speak at the meeting in Lifford on Monday. We have engineer reports of families who are living in condemned houses. The council are trying to tell us that there is no emergency accommodation. It is not good enough.

What if a family’s house comes down, where is that family to go? It has got to the stage that there is damp and mould in these houses. We need to stand up for these people.

“We are going to ask questions and find out what is going on and if they don’t take us seriously, then we are going to have to take over a government building and close it and say, ‘there is heat, electric and a kitchen in this building. These families cannot leave this building until they have got somewhere safe to go for Christmas’.”

Meanwhile, speaking the in the Dáil this week, Deputy Pádraig MacLochlainn pleaded with the government to “act now” and help those defective block homeowners who are living in “the worst houses experts have seen”.

The Sinn Féin TD also called for the housing agency to meet with families and get them out of their houses straight away.

Mr Diver said a three-bedroom modular home can be “turned over” in 15 days, and called on the Council to “sign this off” and “take it seriously”. He said Donegal County Council “must provide modular homes or solutions”.

But during a discussion at this week’s Budget 2023 meeting, the use of modular homes for mica-affected families remained in the balance.

Chief Executive, Mr John McLaughlin said that the council has made a submission to central government seeking approval and funding to repair the estimated 1,000 social homes with defective concrete blocks in Donegal.

“As a matter of urgency we need to get into the space where we get emergency accommodation provided for those people who are living in dangerous situations,” he said.

“We need to send a strong message out to our own electorate that we are working as hard as we possibly can to ensure that those people have a safe roof over their head.”

Cllr Gerry McMonagle said it would be remiss of him not to mention the defective concrete block crisis.

“Families affected by the defective concrete blocks are in need of our support, more so now than ever. It is taking far too long for the new scheme to be implemented.

“This is having a severe impact on the physical and mental wellbeing of those families, they continue to live in damp, cold and dangerous homes due to government’s dilly dallying.

“We must work as a united council to bring this nightmare to an end.

“I accept that most of what is on offer is outside the remit of this council, we should agree here today to select a delegation of elected members and a senior management team to meet with the minister to discuss the on-going delays and to secure from them a promise for funding for the procurement of modular homes immediately to alleviate the suffering of the families most affected.”

Cllr Nicholas Crossan said the defective block issue was a problem to be “solved in Dáil Éireann and not Donegal County Council”.
DECISIONS
Agreeing, Cllr Martin Farren said they are limited in Council and “decisions are made in Dáil Éireann” and “the onus is on our Oireachtas members”.

Cllr Michael McBride said he asked a letter be written to the Minister asking for a meeting regarding modular homes.

“At the moment there doesn’t seem to be any appetite to deliver modular homes in the county,” he said. 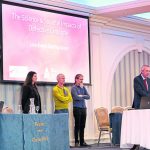 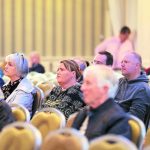 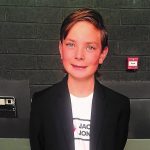 Kris ready for a late, late night on Friday