Letterkenny Athletic Club members who raised €3,245 for the Irish Motor Neurone Disease Association through their participation in the Dublin City Marathon presented their proceeds to the organisation this week.
Letterkenny AC has a long tradition of raising funds for local causes and selected the Irish Motor Neurone Disease Association to be this year’s beneficiary following the successful Climb Errigal Together Challenge held in April. That event was one of 155 climbs held across Ireland as part of the campaign initiated by former RTÉ journalist, Charlie Bird, who was diagnosed with Motor Neurone Disease in October, 2021.
Accepting the cheque from the local sports club, Eithne Cawley, who covers eight counties in her role as an outreach nurse with Irish Motor Neurone Disease Association, spoke of the importance that fundraising initiatives make to those living with Motor Neurone Disease.
“We are really in awe of clubs like Letterkenny AC. Without fundraising, we wouldn’t exist. We are only government funded by 15 per cent. The rest comes from the Irish people. The €3,245 raised will fund the purchase of ten iPads and that is going to make a huge difference to someone who simply can’t communicate because they have Motor Neurones Disease. We know the speech of around 80 per cent of people with NMD will be affected at some stage,” she said.
“I’ve been working with IMND for a long time and there’s no doubt that Donegal is extraordinary for minding each other when it comes to terminal illness. You really are in solidarity with your community. You are very supportive of one another and you rally together. While I see the devastation, equally I see the resilience of people dying of this disease every day.
“There are currently 22 people in Donegal living with MND. We now know that one person is diagnosed every three days in Ireland with MND and that one person dies every three days with MND,” Ms. Cawley added.
Speaking at the cheque handover ceremony in Sister Sara’s in Letterkenny, Letterkenny AC’s Darren Price, who coordinated the fundraising aspect of the Dublin Marathon, extended his thanks to the club members who ran to support the charity, and to everyone who made a donation.
“On Sunday, October 30th, our group toed the line of the 41st Dublin City Marathon and undertook the physical and mental challenge of the 26.2-mile distance. Thankfully we all got to the finish line. However, the physical and mental challenge that we undertook has no comparison to the physical and mental battle that a person with NMD and their families have to undertake,” he commented.
“On behalf of the Letterkenny AC group of runners, I’d like to say a huge thank you to everyone who has donated,” he added.
Thanking all involved from the club who ran the Dublin City Marathon for the Irish Motor Neurone Disease Association, Letterkenny AC Chairman, Raymond Birch, spoke about the importance of the club giving something back.
“Well done to all the club members and the money raised is going to a worthy cause. Our own family has been touched by Motor Neurone Disease – my grandmother, Angela Birch, died from it a number of years ago. I have no doubt the money raised by the club will be well spent and the decision by Letterkenny AC to select IMND as our chosen charity this year will help raise awareness of MND,” he said. 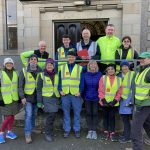