CATHAL Ó Curráin, a traditional musician and singer from Gaoth Dobhair, has received three nominations in the RTÉ Radio 1 Folk Awards 2022. The awards ceremony celebrates the very best in folk music in Ireland from the past year.

From an early age Cathal was immersed in music from attending regular sessions in Teach Huidai Beag and from the yearly classes in An Chrannóg.

Hailing from a family that are best known for their singing, Cathal learned his songs from his aunties Caitlin and Brid Joe Jack.
Performing from a young age with An Crann Og, Cathal has travelled the world with different bands to America, Australia, New Zealand and all throughout Europe.

He has recorded albums with The High Seas, The Friel Sisters and Aoife Scott’s ‘Homebird’ with the multi Grammy award winning Ron Block of Alisson Krauss and Union Station.

Earlier in the year, he spent six months preforming for the Irish Pavallion in Dubai for the Expo 2020 before spending the summer touring America alongside Aoife Scott and The Friel Sisters.

Speaking to the Donegal News, Cathal said he wasn’t expecting the nominations at all.

“This is my first time being nominated and I am absolutely over the moon.
“It is an honour to even be on the same list as the other nominations,” he said.
Cathal is the newly appointed Director of Scoil Gheimhridh Ghaoth Dobhair which is due to take place in the parish at the end of December.

Scoil Gheimhridh Ghaoth Dobhair is an Irish Music Festival that brings in the New Year.
However, before the final touches of the festival are completed, Cathal is off to Australia to perform with a Celtic Christmas.

The RTÉ Radio 1 Folk Awards are due to take place on Thursday, November 17 at 8pm in Vicar Street, Dublin or you can listen live on RTÉ Radio 1.
If you are interested in listening to Cathal’s solo album ‘Cosán Ceoil’ you can do so by visiting https://bandcamp.com/. 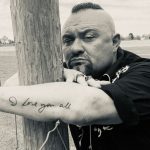 Johnny Cash’s grandson walking the line to the Balor
SHARE