CONCERNS have been raised for the safety of women following the emergence of worrying incidents in Drumboe Woods.

It comes after a woman was reportedly approached and followed by a man at the Stranorlar beauty spot earlier this month.

The man was at first trying to engage with her, pretending he had lost his dog.

With an empty lead in his hand, the situation initially seemed legitimate but turned into a cause for concern for the woman when the man persisted in following and talking to her.

The woman was met with an outpouring of support when she shared her experience online, which also prompted another woman to reveal she experienced the same scenario a few months ago.

“This also happened to myself during the summer this year. A man was looking for a dog and had a dog lead in his hand.”

The woman said she could see no sign of a dog in the woods having circled the area twice.

“He was extremely well dressed, certainly not clothing for walking a dog. He was walking in the opposite direction but when I looked behind me he was following me. He actually called me when I got to the car. I sat in the car to see where he went but he never came out of the woods.”

“I reported it to the guards and fair play to them they came to the woods straight away. I was told it was the third time that week that something like that happened in Drumboe Woods. I haven’t walked it alone since.”

A spokesperson for An Garda Siochana urged anyone who experiences any such incident to report it to them immediately. 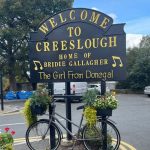