A group of Tory islanders are currently replacing the roof of their local church that had fallen into disarray, following a successful fundraising campaign.

The fundraiser also covered the costs of high quality storm glazing used to preserve the stunning stain glass window from behind the altar.

Teach Pobail Cholmcille Naofa was built in 1857 and the roof was last replaced in 1971.

The work is being carried out entirely by local volunteers.

“It was like the old fashioned way- men were up on the roof doing the work and the women were all making food and bringing it over to them to keep them going,” she said.

While stripping away the old slates, workers made an interesting discovery – they found the names of those who had replaced the roof over 50 years ago scribed into the wooden beams of the church.

“I was there and I heard a roar from above, “look at this” they shouted and as they started to lift the slates all these names started to show,” said Marjorie.

Amongst the names found was the signature of King of Tory, Patsy Dan Rodgers who has since passed away.

Other names included the fathers of some of those who are working on the current refurbishments.

The refurbishment project was a full community effort, with helping hands from across the globe involved in the repairs.

One of the volunteers is an American who is currently living on the island to learn Irish. Another was a man who the locals fondly refer to as “English Dave”.

There are 16 Ukrainian refugees currently living on the rural Island, some of them were also involved in the project.

“There was a combination of different people and different nationalities all pulling together as a community, it was lovely,” said Marjorie.

From the scaffolding the volunteers flew a Ukrainian flag alongside the Irish tricolour as a symbol of solidarity.

The group are now in the final stages of the roof refurbishment– weather permitting. The bustling Atlantic weather is not very forgiving on the remote island that is situated almost 15 km of the coast of west Donegal.

“You wouldn’t put anyone up on a ladder or scaffolding today,” laughed Marjorie.

“A special thank you to all the wonderful Tory ladies who provided the workers with food throughout the job,” she added.

She said the community’s next goal is to have the church picked and plastered, “it will be in good shape then.” 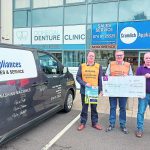 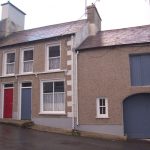 Ramelton project up for heritage award