It is a milestone year for the Mulroy Soccer Academy and they will hold a 20th anniversary celebration night at the Silver Tassie Hotel on Sunday October 30.

Mulroy Soccer Academy was formed in 2002 initially as Swilly Mulroy Underage Soccer Academy (SMUSA) with a vision of encouraging and promoting the development of underage football for boys and girls in the Swilly / Mulroy area i.e. Fanad, Glenvar, Kerrykeel, Rathmullan and Whitestrand. The founding members of the club were Colm McGonigle, Fergus McAteer and Eamon McConigley.

Initially, the clubs in the surrounding area, Rathmullan Celtic, Whitestrand United, Kerrykeel 71 and Fanad United were on board but due to a number of complex factors including insurance complications, Mulroy Academy began life in Trialough on the home ground of Fanad United.  At a public meeting held in Paddy Mórs, Kerrykeel on 25th February 2002, the first committee of the club was formed which consisted of Eamon McConigley (Chairperson), John McElwaine (Assistant Chairperson), Fergus McAteer (Secretary), Colm McGonigle (Assistant Secretary) and Martin McAteer (PRO).

After many further meetings under the guidance of FAI representatives, Declan McIntyre and Joe Boyle, the club officially launched on 27th April 2002 with former Republic of Ireland goalkeeper Packie Bonner performing opening ceremony duties at Trialough. The club continued from there with summer training and a mini-world cup taking place that year. In 2004, Mulroy Academy entered the North-West Schoolboys League and in 2006 the club joined the Letterkenny & District Schoolboys League.

Mylie McBride (Kerrykeel) was the captain of the first trophy winning team, an under 10 astroturf league competition in 2003. The following year the club changed its name to Mulroy Academy as it was providing underage football for children predominantly from the Mulroy catchment area. The club have grown from strength to strength over the past 20 years with the annual summer camp a huge part of the summer activities of the club. The opening of the Harry Blaney Bridge in 2009 extended the players catchment area to the Carrigart, Glen and Downings.  In 2015, the club introduced girls specific football teams in the club which coincided with the ongoing growth of the women’s game on a nationwide level. The club use Trialough, Fanad, Rab’s Park, Kerrykeel and in recent years McGarvey Park, Whitestrand as their home grounds and this season the club operated 14 different teams across all age groups and in excess of 200 children are registered with the club.

Throughout the years there have been many achievements for the club, from League and Cup honours to representative teams on the national stage as well as a plethora of players selected for various representative League teams, County teams and Finn Harps Academy. This season also saw the club extend its age group range to include a youth team (Under 18) under the guidance of the Donegal Schoolboys Youth League.

In 2018, the club achieved the unique FAI Club Mark Entry Level accreditation. The FAI Club Mark is an award based on best practice in the governance, management, and administration of a football club. In 2020, the club were selected as one of the first six clubs in the country to achieve the FAI Club Mark One Star award, which gave the club the status of an official FAI Player Development Centre.  The FAI President Gerry McAnaney visited the club to present the award.

In September 2022, in keeping with the club’s trajectory on the FAI Club Mark pathway, Mulroy Academy were selected as one of only eight clubs nationally to pilot the new FAI Club Mark Two Star Award.

A lot has changed in 20 years with the implementation of the FAI Player Development Plan in 2015 a very significant factor helping improve standards and structures across the underage game.  Over the years, Mulroy Academy has grown and developed in so many different aspects of the club.  The clubs mission statement in 2002 remains a pivotal cornerstone of the club in 2022, to encourage and promote participation and development of soccer for boys and girls in the Mulroy catchment area. 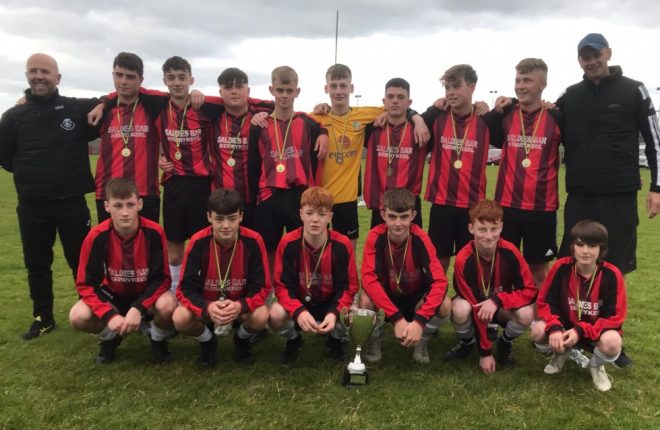 Mulroy Under 16 Cup winners from this year.

Great progress has been made over the last two decades and the club will launch a book on Sunday week (October 30) which contains a 120-page photographic history of the club.

The foreword has been written by Packie Bonner, and there are messages from Gerry McAnaney and Liam McGroarty, UEFA. A percentage from all book sales will be donated to the Creeslough Support Fund.

Marty Friel of Highland Radio will be the MC at the night of celebration and Bernard McGettigan will provide entertainment.

Tickets, which includes supper, are priced at €25 and are available from committee members Fergus McAteer (0864043532) or Marie Sweeney (0879725863). There is also an online booking facility available through the club’s Facebook page.