A member of the first family of American country music will pay a visit to The Balor Arts Centre, Ballybofey this weekend.

Thomas Gabriel, the eldest grandson of Johnny Cash, takes to the stage on Saturday night.

Singer-songwriter Thomas Gabriel has lived out the stories his grandfather sang about. This Saturday Ballybofey audiences will get a very personal and intimate glimpse into his life growing up with Johnny and June.

In January 1968 The Man in Black took to the stage at Folsom State Prison to deliver an electrifying show.

The performance was captured on a live album released four months later, topping the charts, revitalising the maverick country star’s career and selling more than three million copies on its way to becoming an all-time classic.

Fifty years later, in 2018, singer-songwriter Thomas Gabriel was following in his grandfather’s footsteps at the infamous California prison.

“It was surreal,” recalls Thomas.

“I went and was standing on a stage in Folsom Prison in front of Folsom prisoners, singing the song Folsom Prison Blues. There was even one guy in the audience who was there for his show and mine – he had been there the whole time. He was incarcerated when he was 18 years old and was still there.” 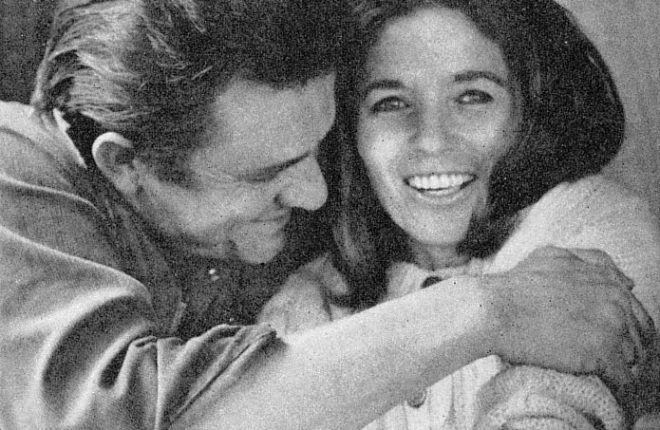 Johnny and June, picture by Joel Baldwin for LOOK Magazine, 1969.

Given Thomas’s family history, it is almost no surprise that he is a living distillation of numerous hard-living country music tropes – there had been trouble with drink and drugs, with the law, and with women. And hearing him sing, genetics have given him his grandfather’s voice.

He actually wrote most of what became his deeply autobiographical debut – 2018’s Long Way Home’ while still behind bars.

“If you look at the album, it’s kind of a timeline, it was meant to be from my first memories to the time of release of that album. Putting all those songs together and releasing them was really good for me. It was an accomplishment I needed to have. I needed to take all of that life experience and put it out and share it.

“The good thing about Long Way Home is I’ve had a lot of feedback from people saying that they can relate and it’s helped them out. That being the case, none of that was in vain.”

Songs and Stories with Thomas Gabriel is at the Balor Arts Centre, Ballybofey this Saturday October 29 at 8pm. Tickets are €15 available from The Balor Box Office on 0749131840 or online at www.balorartscentre.com.