DANIEL O’Donnell will have to save Dungloe when it comes under attack this Halloween.

At least that is the script of the Kincasslagh man’s new music video which is being shot in the town.

The Donegal News can reveal that the Kincasslagh singer will have to swing into action to rescue Dungloe from some nefarious visitors.

Dramatic footage from the ambitious shoot which has been leaked online shows a trained stunt man being set alight.

Behind the cameras guiding Daniel through his heroics will be Ciaran McCann and Shaun Doogan of Re-Act Productions.

Ciaran said the video will be a “huge stepping stone” for Re-Act Productions and that working with someone of Daniel O’Donnell’s calibre is a “massive opportunity”. 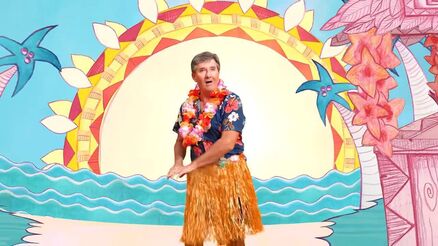 Daniel in a hula skirt.

It seems that adventure comes with age for Daniel.

He turned 60 on December 12, two months after donning a hula skirt and Hawaiian lei for his single ‘Down at the Lah De Dah’.

The lighthearted video showing him surfing waves, sipping cocktails and playing the ukulele went down a storm on social media.

For his Halloween single it remains to be seen whether Daniel will pull on a red leather jacket and follow in the footsteps of Michael Jackson almost 40 years after the release of the ground-breaking classic Thriller.