If you were throwing a party and you could invite anyone in the world, dead or alive, who would you ask around? Matthew O’Rourke. It’s always an eventful night when you finally get him out, could end up in any part of the country.

Where do you like to go out to celebrate after a big victory? Would have to be the famous Tinneys, good pints and I would say good food but he has a habit of putting sweet corn and pineapple on the pizzas.

What’s the worst pitch you’ve ever played on? Good few places come to mind here. Last year I would have to say Lagan, could hardly see Corrie Lee in the middle of the pitch with all the holes.

Which character in any film are you most like? Maui from Moana, the Demi god.

Any odd items in your kit bag? Fiver for the referee not very often there’s one in there.

Who’s the biggest joker in the team you play for? Last year between Bapsy (Kieran Brennan) or Lee White they were always at someone, but since Lee hung up the gloves for the sixth time, Marty Owens has carried it on well for him.

Which team mate has the best looking other half? Would have to say myself or the locks would be changed when I get home.

Who is the worst/best trainer? Best would be Barry Tourish always gives 100% when he’s there but he’s always the first boy to cry after about being sore. Worst: Raymond Foy jumps in and out of drills. Top class for a few then the fitness kicks in and slows the drill up.

Who spends most time in front of the mirror in the dressing room? Definitely Corrie Lee Bogan if he’s not fixing the hair he’s polishing the brown shoes.

Who’s the best/worst person to sit beside on the team bus? Best Would be Micheal Dunnion always looks to stop for ice cream. Worst probably Aaron O’Hagan.

Who has the best and who has the worst diet on the team, and what does it include? Not many stand out for the best diet but for worst it’s between Aaron O’Hagan, he has a loyalty card for the local Chinese or Marty Owens, he plays with a box of fags in his socks.

Toughest opponent you have faced? Definitely Kevin McHugh. I’ve had a few sleepless nights after games.

Best or worst quote you’ve heard, either from a manager, player, opponent? Aaron O’Hagan has a famous one he would use before a game “By hook or by crook”. Still to this day not one of us in the changing room have a clue what he’s on about.

Best manager you’ve ever played under? Few names come to mind but I’d have to give it to Bapsy. He had this strange tactic where if I was playing a blinder he would hook me at half-time.

Best ever performance? Ah probably back in underage playing in the national cup beating Cherry Orchard 1-0 in Dublin.

One to forget? Cappry at home last year. The less said the better.

Sporting ambition? To win the premier with Castlefinn this year.

When you were playing in the back garden, who did you pretend to be? John Terry, even had the full kit on.

If you were in charge of transfers, who’d be in and who’d be out of the team? In would be Matthew O’Rourke. Not a new signing but if you could get him to show up he would be a great signing. Out would be Ronan Tourish – he nutmegged me a few times in training still not happy about it. 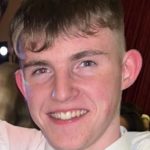 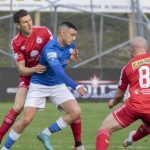