A rescue dog who became a much loved member of a community in west Donegal has been immortalised in stone.

Harry was a well known fixture in Gaoth Dobhair for 15 years after being adopted by the Nic Niallais family.

They brought him from Wicklow where, along with his brothers and sisters, he had been dumped in a wheelie bin.

Following an appeal by a local animal sanctuary, Grainne Nic Niallais and husband Noel agreed to take in the ungainly pooch.

But Harry – so named because of their son Seaghán’s love of Harry Potter – decided that one family was not enough.

Instead he spent much of his life wandering from house to house in the parish where he was always met with a friendly pat as well as food and shelter.

Now, two years after his death, a statue and plaque have been placed on Magheraclogher strand to commemorate the wily whippet.

“He was a rescue dog and we brought him from Wicklow to Gaoth Dobhair,” said Grainne Nic Niallais.

“We had him for a while before he took flight. After that he belonged to the community, staying in different houses every night. He spent a lot of time with one man, Hughie Doherty, but everyone owned him really.” 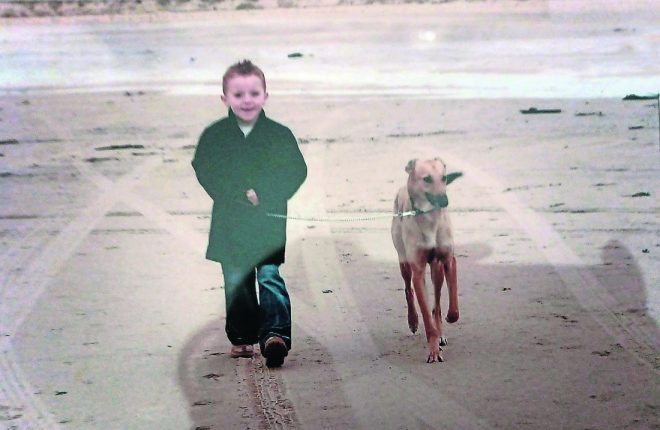 Young Seaghán walking Harry. It was Seaghán’s love of Harry Potter that gave the lurcher his name.

Harry developed his own routine, visiting Kitty’s Cafe in Bunbeg for his breakfast each morning before mooching along to the nearby Matt Bonner’s shop. Apache Pizza in Gweedore regularly provided dinner for the hungry hound.

“He was a very unique dog who had his own mannerisms. He would go missing and you would have got phone calls about him. But you could have found him anywhere,” said Grainne.

While friendly and affectionate, Harry also had a mischievous streak. On more than one occasion he was spotted walking up the street with a loaf of bread in his mouth that he had pilfered from a local delivery van.

According to Grainne Nic Niallais the four legged favourite was “spoilt rotten” and wanted for absolutely nothing during his long life.

“There must have been six families who took him under their wing. He was everyone’s dog and everyone in Gaoth Dobhair knew him.”

Harry passed away as a result of old age, falling asleep one day in the garden of one of the families who looked after him.

But he lives on in the newly placed commemorative statue on Magheraclogher beach and in the plaque bearing the poignant inscription – ‘In memory of a very special dog named Harry. You will forever stay in the hearts of many people who shall miss you and miss the sight of a ginger, skinny, smart and very special dog’.