Keith Duffy and Brian McFadden are set to join some of the biggest names in sport and showbiz as they compete in next month’s Celebrity Series event at the famous Old Tom Morris links at the Rosapenna Hotel & Golf Resort.

The event, presented by the McGinley Foundation, is set to take place on Tuesday, August 16.

The McGinley Foundation, set up in 2013, aims to support charities and not-for profit organisations that Paul and his wife Alison have a close association with.

The Foundation puts particular emphasis on supporting those that assist children and young adults. 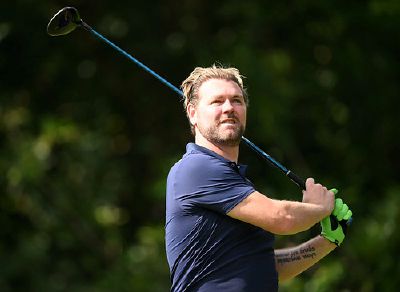 Boyzlife star Brian McFadden takes to the golf course ahead of Irish Legends Event at the Rosapenna Hotel & Golf Resort.

Daniel O’ Donnell will be joining the Boyzlife members to represent the music world at the event.

Icons from the world of sport include former Republic of Ireland footballers Niall Quinn, who represented Arsenal, Manchester City and Sunderland, and Steve Staunton, who enjoyed spells at Liverpool and Aston Villa.

Kevin Moran, who is famous for playing both gaelic and football is also confirmed for the event along with hurling duo Anthony Nah and Joe Canning.

The Irish Legends event will run for four days beginning on August 16 and will have plenty happening on and off the course.

Two concerts will also be held at the event.

They are set to take place on the grounds of the Na Dúnaibh GAA pitch adjacent to Rosapenna, on Friday 19 and Saturday 20 of August at 5pm.

Those attending the golf on the Friday and Saturday will receive free entry to the concerts.

Na Mooneys are an Irish folk music family from Gaoth Dobhair, Donegal, who formed in 2013.

The band is made up of Mairéad Ní Mhaonaigh and her siblings Anna and Gearóid along with Mairéad’s nephew, Ciarán Ó Maonaigh.

Mairéad is a household name among Irish music fans as a leading member of the band Altan and has been called Ireland’s ‘Queen of Trad’.

Donegal artist, Declan Mc Clafferty will be the support act for the evening.

Meanwhile, European Ryder Cup-winning captain Paul McGinley will get his 2022 Legends Tour campaign underway at the Irish Legends and will be joined in the field by 1999 Open Championship winner Paul Lawrie and runner-up Jean van de Velde.

The event will be the second Irish Legends tournament the Rosapenna Hotel & Golf Resort has hosted in as many years.

Phil Harrison, chief executive officer of the Legends Tour, said he is really looking forward to the event.

“It is great to add so many famous names to the field of players attending this year’s Celebrity Series held as part of the Irish Legends.

“The McGinley Foundation hosted a wonderful event at Rosapenna Hotel & Golf Resort last year and we are all looking forward to returning,” he said.

Speaking about the festival, Cllr. Liam Blaney, Cathaoirleach of Donegal County Council, said events like these are crucial to our local economy and they help boost the tourism in Donegal.

“Alongside the Irish Legends presented by McGinley Foundation in Rosapenna, this will create new and exciting reasons to visit Donegal,” he said.

There is still limited availability to watch the Legends in action at the weekend with tickets still available to purchase at legendstour.com/tickets