THE Donegal senior footballers will have a new bainisteoir next year after Declan Bonner stepped down from the role this  evening.

Bonner addressed club delegates at a County Committee meeting and confirmed that he will not be continuing in the position.

The Na Rossa clubman informed the players and the backroom team of his decision on Monday.

Bonner took on the senior reins in 2017, and led Donegal to Ulster titles in 2018 and 2019. However, they lost two more provincial deciders, and weren’t able to make the dent they desired nationally.

The team lost to Derry and Armagh in this year’s championship, and Bonner didn’t speak to the media after the loss against the Orchard county.

However, after a period of consideration, he has decided that he will not be continuing in the role.

In a statement released this evening, Bonner said:

“I am stepping down with immediate effect from my role as Donegal Senior football manager. It has been a great honour to manage this team over the past 5 years, as it was to manage the teams from u16 level up in the 5 years before that. Highlights from my time in the role include competing in 4 Ulster finals and winning 2 of these, back to back, in 2018 and 2019. I am proud to leave the team playing league football in Allianz League Division 1 next year.

“I would like to thank each and every player involved with the team over the past 5 years as well as every member of the management team during this period. Their commitment and work ethic was inspiring and working with them has been a privilege. Thank you to the County Board for their support throughout and in particular, our chairperson Mick McGrath for his support. We didn’t always agree on everything but both of us always had the best interest of Donegal at heart.

“Club is the heart of the GAA and I would like to thank all 40 clubs in Donegal, in particular my own club Na Rossa who have been a brilliant support to me always. I would also like to thank the genuine Donegal supporters, most of whom I know personally. Many have travelled the length and breadth of the country with the team and I know they will be back in the stands and terraces supporting the team next year.

“Thank you to my wife Catherine and our family Amara, Christian, Arianna and Cillian for their patience and support always.”

County chairperson Mick McGrath thanked Bonner for his 10 years of service to County teams during which time he won ten trophies.

McGrath announced that the County Executive would be selecting a 3-person panel to liaise with parties interested in taking over management of the Senior Squad.

Donegal clubs are also free to nominate candidates with a deadline of August 15th established for such nominations. 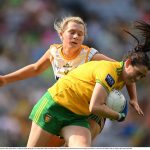