BISHOP of Raphoe Alan McGuckian says one of the first things he did on being appointed to the Raphoe Diocese was search the internet for ‘Park Run Letterkenny’.

This month marks five years since the Antrim man was asked to oversee the diocese of Raphoe, making him Ireland’s first Jesuit bishop.

In a wide ranging interview for the Catholic television channel Shalom World, Bishop McGuckian talks about his early life, his family and his path to the priesthood.

He also reveals how he never expected to become a bishop but was delighted to be appointed to Donegal.

Recalling the moment a Polish priest on behalf of the apostolic nuncio told him that Pope Francis had chosen him as Bishop of Raphoe, Fr McGuckian said, “Part of the rumour was ‘you are an Irish speaker and they will be looking for an Irish speaker for Raphoe’. And I think I was saying ‘it’s going to be Raphoe, it’s going to be Raphoe’ and I was happy with that thought because I have long associations and affections with county Donegal. He said ‘Raphoe’ and asked if I accepted. I said ‘I do’. It was a life changing moment.”

Bishop McGuckian said that on arriving in Letterkenny from the Living Church office in the Diocese of Down and Connor where he worked full-time for six years, he immediately sought out a local running group.

Revealing how exercise is a big part of his life, the 69-year-old said, “There are two things that go together, that hold me grounded, prayer and exercise. Prayer is not to be taken for granted but when I pray well and give good time to prayer, there is a very good chance of me staying grounded.

“But getting out and exercising, when I first came to Letterkenny one of the first things I did was Google ‘Park Run Letterkenny’ and there was one.

“I was ordained on August 6 2017, the feast of the transfiguration, and the following Saturday I showed up at the Park Run.

“I have been running ever since and there is a wee group then that, when I’m free, I run with two nights per week.

“That made a big difference to my fitness levels and to my readiness to get out and exercise.” 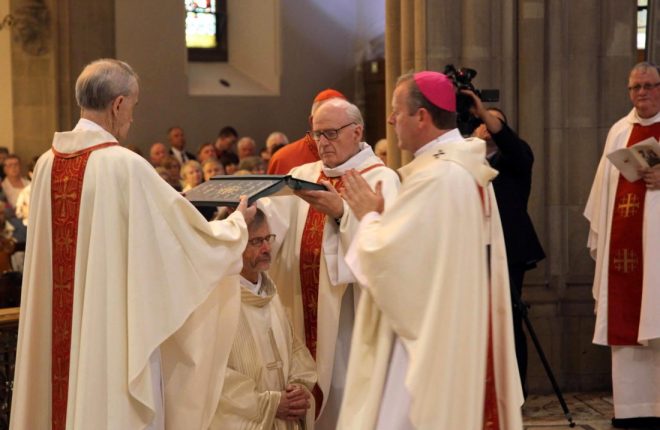 Bishop Alan McGuckian during his ordination ceremony. Being appointed to Donegal was a “life changing moment” he has revealed.

Along the same lines Bishop McGuckian has walked the Camino de Santiago on several occasions.

He said he would love to see an ‘Irish Camino’ developed in the footsteps of St Colmcille all the way across to Iona in Scotland.

“Here in Donegal, with the centenary of the birth of St Colmcille, a few of us decided we would see about established a Camino linking all the places in Donegal associated with Colmcille,” said Bishop McGuckian.

“Twice in two summers I have walked from Glencolmcille around the west coast, out to Tory, around to Gartan, up to Letterkenny through to Raphoe and into Derry, even up to Shroove in Inishowen. It is 250km, a brilliant first stage of a Camino and we are going to work in the coming years to make that a reality.

“Colmcille is so important, he is all over Donegal and the idea would be that we would walk on from Derry along the north coast, probably to Ballycastle, from where people could get a boat across to Argyll and from Argyll up to Iona.

“That is the plan and in time I certainly will walk on from where we have reached already and reach Iona.”

You can watch the full interview here: https://shalomworld.org/episode/bishop-alan-mcguckians-unexpected-call-to-god