Advertisement
HomeEntertainmentA dream combination that will light up the Balor
Advertisement

THE Balor Arts Centre promises a “dream combination of two master musicians” this Friday as acclaimed vocalist Iarla O Lionaird and pianist Ryan Molloy take to the stage for a very special gig as part of the Earagail Arts Festival.

Vocalist with critically acclaimed Irish/American band The Gloaming, Iarla O Lionaird has carved a long and unique career in music both at home and abroad. From his iconic early recording of the vision song Aisling Gheal as a young boy to his ground-breaking recordings with Dublin’s Crash Ensemble and New York’s Alarm Will Sound he has shown a breadth of artistic ambition that sets him apart in the Irish Music Fraternity.

A child of traditional music, it is the individual sonic qualities of his voice, with all its midnight depth and soaring breadth, that define him, transcending anything that might box or classify him as one thing or another.

A twice Grammy-nominated artist, the stellar cast of composers and performers he’s worked with is as long as it is impressive – Robert Plant, Nick Cave, Sinead O Connor, Peter Gabriel – the list goes on.

As a composer and performer, Ryan Molloy’s music has been performed to international audiences on four continents for over fifteen years – Lucerne Hall, KKL (Switzerland), Kölner Philharmonie (Germany) and our own National Concert Hall are just three of the major concert venues he has appeared at.

Ryan’s compositional work has won numerous prizes and has been broadcast both nationally and internationally.  Several of his works have been chosen to represent Ireland by the International Society for Contemporary Music, including ISCM 2020 World New Music Day in Hong Kong in 2015, Vancouver (2017) and in 2020 in Auckland, New Zealand.

In great demand as an accompanist – including recent work with well known groups such as We Banjo 3 and String Theory – he has recorded over a dozen albums and his repertoire spans numerous genres from traditional Irish music to contemporary classical music.

Together this is a collaboration between two master collaborators – each bringing the best out of each other – to create a night of magical music.

Iarla O Lionaird and Ryan Molloy play The Balor Arts Centre, Ballybofey, this coming Friday July 15, at 8pm. Tickets are €25 available from The Balor Box Office on 0749131840 or online at www.balorartscentre.com 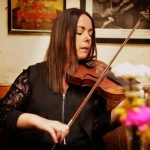