Advertisement
HomeEntertainmentLetterkenny artist comes face to face with himself
Advertisement

LETTERKENNY man Macola Vonga got the shock of his life when he came face to face with himself during a visit to Dublin.

Macola was on a visit to the Royal Hibernian Academy’s annual exhibition when he spotted his portrait, recently painted by fellow artist and friend Philip Mackey.

While he had been given sight of the finished product in Philip’s Letterkenny studio, he had no idea that it had been submitted to the Royal Hibernian. And out of 4,000 initial entries, it was chosen for their yearly collection and for inclusion in their official 2022 catalogue.

Also selected was ‘Microplastics’, a piece by Donegal sculptor Redmond Herrity. And it was he who helped mastermind the plan to get Macola to Dublin.

“I sometimes work with Redmond and he rang me to ask if I wanted to go,” Angolan-born Macola explained.

“He didn’t tell me about the portrait though and it was just perfect because it was my birthday. They hid it from me until I saw it on the wall. Philip and I have been friends for years and I love the painting. He really captured something there, not just me but a kind of nobility. It’s a great piece.” 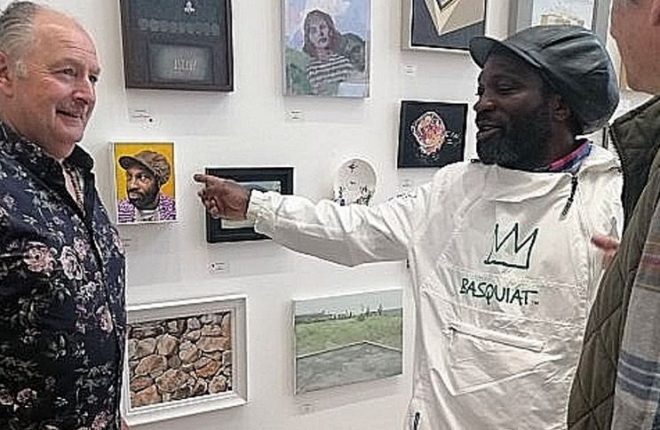 Macola’s reaction on seeing his portrait hanging in the Royal Hibernian gallery. To his left is artist Philip Mackey.

Philip Mackey has built a reputation as one of Ireland’s foremost portrait artists. He featured on Sky Arts’ ‘Portrait Artist of the Year’ in 2014 and 2016 and is a former winner of the Derek Hill Foundation Award.

“When you are painting portraits you find people you want to paint, people who are interesting. I’ve known Macola for years and would consider him a friend so I approached him and he was happy to do it,” said Philip.

Painting someone of African origin was a new departure and meant using the palette to create new skin tones. The purple and white shirt Macola wore added a further dimension to the image.

The artist took over 100 photos of his subject before selecting one at the angle he wanted.

On completion he decided to send to the Royal Hibernian. For the sixth time in 12 years they selected his work for display.

“This is the first exhibition in the Hibernian after Covid. They had over 4,000 submissions and from those they chose 390 artists,” said Philip.

“Obviously Macola knew about the painting but he absolutely did not know that it was going to be displayed in what is possibly the most prestigious exhibition in the country.”

Both Redmond and Philip’s pieces will remain on display until July 24. They can be viewed further at rhagallery.viewingrooms.com.