CONVOY’S Jessica Harkin, better known to many by her alter-ego Kazoo the clown, is embarking on a cruise ship career.

The 26-year-old has just joined the 1,200 strong crew of the Ruby Princess.

Jessica, who as well as a clown is a talented magician, has spent the last few years touring with Circus Corvenieo. A staple of Irish entertainment for centuries, Circus Corvenieo travels the length and breadth of Ireland.

“I’ve wanted to be a clown since I was three,” Jessica told the Donegal News before boarding the Ruby Princess.

“When I was very young I went to a circus and I thought the clowns owned the elephants. I wanted an elephant so I decided I wanted to be a clown. In my early teens I started learning magic and that is when I returned to the idea of being a clown.”

The years of hard work paid off four years ago when Kazoo the clown landed her first job working in Santa’s grotto in Letterkenny. From there her skills brought her on to the radar of Circus Corvenieo.

Jessica recently made global headlines when she got booted off the dating website Tinder for posting images of herself in full clown costume.

Keen to find a “clown man” with a sense of humour to match her own, she uploaded six pictures of herself wearing her full regalia – gloves, hat, fake nose and face paint.

Tinder though didn’t see the funny side and banned her profile due to “activity that violates our Terms of Use”.

The story was picked up all over the world and even featured on the Drew Barrymore Show.

Following the negative publicity Tinder quickly rolled back on their decision.

“They ignored my repeated pleas but as soon as they were asked by the press for official comment they reversed the ban,” said Jessica.

The controversy did her no harm at all and boosted her Instagram following to 125,000 fans. And it landed her a boyfriend, a fire breather also working with Circus Corvenieo. 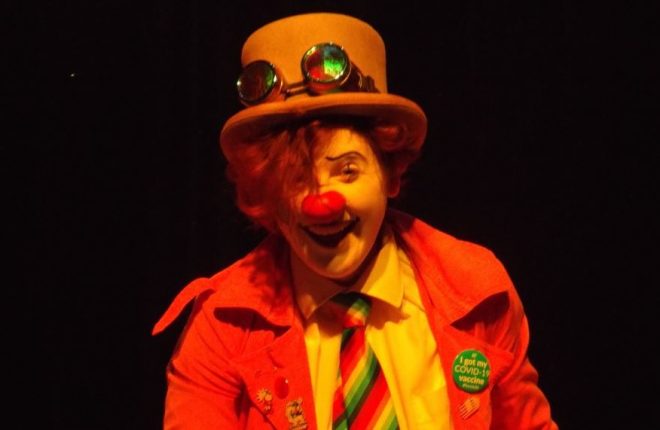 Jessica as her colourful alter-ego Kazoo the Clown.

The dream is to work in America and being aboard the Ruby Princess should move Jessica a step closer to securing the necessary visa.

The former Tesco employee will be aboard the cruise ship until January, but rather than performing as a clown she will be a junior assistant cruise director. At least for now.

“I would rather be performing than hosting but this will help towards the criteria I need to get the right visa.

“I’ll still have my clown costume with me so we’ll see how it goes. I might have to subtly slip a business card into the director’s pocket.”