Advertisement
HomeSportThird time lucky for Letterkenny Community Games AGM?
Advertisement
By Ciaran O’Donnell
A final appeal to parents and guardians of children in the Letterkenny area to get involved at committee level to ensure Community Games continues in the locality has been made by outgoing Letterkenny Community Games PRO, Sean Crossan.
Two previous attempts to elect a new committee in recent weeks failed due to a lack of numbers. In what is being seen as a last-ditch effort to save the organisation locally, the annual general meeting has been refixed for Monday, May 9th, at 8.30 pm in Letterkenny’s Station House Hotel.
“Twice we fixed dates for an annual general meeting to form a committee for 2022, and twice we had to adjourn because we hadn’t the people willing to fill the various roles. If we can secure the commitment of a minimum of six new faces, Community Games in Letterkenny has a future. If we can’t manage that, we’re in serious bother,” Mr. Crossan said.
“I’d still like to think we can attract the right people to fill the key roles to keep Letterkenny Community Games ticking over at Monday night’s annual general meeting,” he added.
Sean and the Crossan family have been associated with Letterkenny Community Games for around 40 years.
“It’s sad that things have got to this point. Over the years, there have been plenty of children who didn’t have much of an opportunity to get away because they were up against other children who might have been that bit stronger and fitter in certain sports. But fair play to my father – he got activities like skittles going locally and this gave boys and girls a chance to get away and compete in the Ulster’s, with the hope that they might qualify for the national finals in Mosney. And that did happen on a number of occasions.
“I still meet parents who tell me neither they nor their sons or daughters will ever forget the time they competed for Donegal and Ulster, having come through their area and county finals,” Mr. Crossan commented. 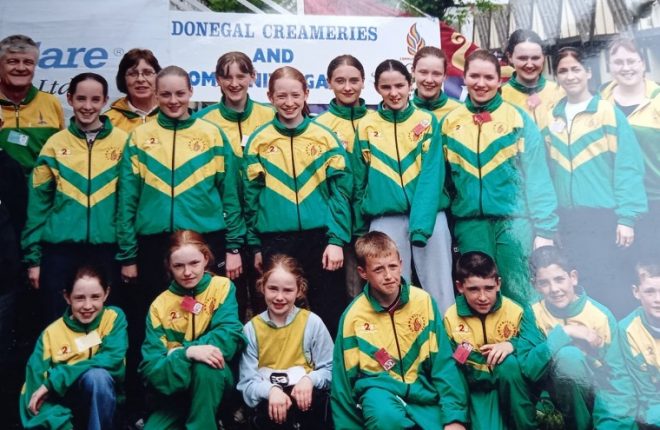 The late Michael Crossan pictured with a local team at the national finals of the Community Games in Mosney.

“Community Games brought joy and happiness to many boys and girls from in and around Letterkenny. Community Games gave them an opportunity to take part in different activities they otherwise would never have experienced. The confidence of numerous children was boosted down the years by their involvement in Community Games and that stood them in good stead when they stepped into the world later in life as young men and women – be that through sport or through their work.
“Local businesses have always been extremely generous when it came to sponsorship and it should be noted that sponsorship is not actually a problem for Letterkenny Community Games. We have a very healthy bank balance, so there is money there to spend on the children,” the PRO added.
Backing Mr. Crossan’s call for parents and guardians to step up and put themselves forward for positions on the local committee, former Community Games National President, Gerry Davenport, is hopeful that the situation will take a turn for the better.
“The Letterkenny Area Committee is going over 40 years. In the early days, it had people like Sue McCormack, Tom Crossan, and the McGinleys to the fore and driving it on,” Mr. Davenport said. 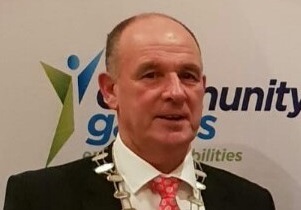 “Covid has certainly been a factor in the organisation’s difficulty in getting people on board. Volunteerism has taken a massive hit over the last two years, and with Community Games depending so much on volunteers, it has been impacted greatly. From what I’ve been hearing, it’s the larger urban areas around the country that are being affected most,” he added.
“The inability so far to elect a new committee for the Letterkenny area is impacting most on the boys and girls who have been training and planning to take part in Community Games. They’ve been looking forward to getting back involved again after two difficult years,” the former national president said.
“The people who served on committees over the years got involved primarily through their children. My own children were involved in Community Games and my grandchildren are now almost out the other side, too. Many people have served Community Games in Letterkenny so well for so long, with the likes of the late Michael Crossan keeping things going. Now is the time for new faces with fresh ideas to get involved and move things forward.”
“While it’s all about participation, Letterkenny also enjoyed a lot of success at county, provincial and national levels in a variety of sports and activities down through the years. Letterkenny was also held in high regard nationally because of the way it ran the organisation at local level,” he added.
“If we don’t get a committee in place on Monday night, there will be no Community Games in Letterkenny for the coming year. That’s the bottom line.”