A DUNGLOE woman who is battling stage four bowel cancer is speaking out in an attempt to remove the stigma around the main signs of the disease.
April marks Bowel Cancer Awareness Month and recent research carried out by the Irish Cancer Society has indicated that almost one in two people are not confident about identifying the signs of bowel cancer.
Tess Greene (39) from Dungloe is currently undergoing chemotherapy after being diagnosed with stage four bowel cancer in December.
Tess is speaking out about her diagnosis to help other people identify the signs of bowel cancer but to also remove the stigma surrounding the symptoms, including constipation.
“In my head, bowel cancer was something that was attributed to older people, not young people,” she says. “Cancer knows no ID or boundaries.”
Tess had a history of constipation but when it grew worse in October last year and she also started to experience pain, low mood and fatigue, but she didn’t think it was anything to be concerned about initially.
Tess explained she was able to pass off a majority of the symptoms to life changes as she had recently changed her method of contraception and attributed her cramps to this while she had also moved to Derry and started a new job.
On top of that, her daughter Millie had just moved away for college and she had empty nest syndrome and attributed other symptoms to stress and exhaustion.
However, after a trip to Dublin airport to collect her friend, Tess’s pain grew worse and she eventually went to A&E. While waiting to be seen, she realised that she hadn’t been to the toilet in almost three weeks.
Following, an X-ray, ultrasound, CT scan and colonoscopy, Tess was told she had a tumour in her bowel.
On December 22, she underwent an 11-hour surgery and in January, she received a diagnosis of Stage 4 bowel cancer which had spread to her lymph nodes and to the peritoneum, the layer of tissue lining the inside of the tummy.
Tess explained constipation is a major symptom of bowel cancer but many people will not talk about it and prefer to self-medicate rather than go to a doctor.
“I was too dismissive of signs that weren’t normal,” said Tess.
“It is embarrassing to go to the doctors but if you are constipated, there is something wrong with your body.
“It may not be cancer, it could be stress or a food irritation but it is still something that needs to be looked at.
“We have made it a joke or dirty when really it is very important to have the conversation with a GP and get to the bottom of the causes,” said Tess.
Tess is currently undergoing chemotherapy, which has made her very nauseous at times, and she is due to have between 12 and 18 treatments.
Clinging to hope
She has completed five sessions of chemotherapy and she is hopeful of a positive outcome. Her family, especially her daughter Millie, have been a constant support during this time.
“I have to believe this is just a chapter and I have other chapters to go,” said Tess.
“When you hear stage four, that to a layperson is terminal and I said this to an oncologist who said there is some hope so I will cling to that hope until I get through this.
“The longer this goes on, the more I am learning what is important such as my daughter Millie, family, friends and experiences.
“I hope this insight into how important life is and what a gift it is stays with me forever,” said Tess.
Tess has set up an Instagram page ‘My Mindset and Me’ where she journals and documents her journey. She is hoping that the page will also help raise awareness of the disease and the signs to look out for.
“I have always been a journaler but since all this happened, it is almost like the words would not pour onto the page.
“The outlet of Instagram has really helped me document my journey and I find it quite freeing.
“It has been really helpful and if I can help just one person to recognise the signs, I will be very happy,” said Tess.
To follow Tess’ journey, follow ‘My Mindset and Me’ on Instragram or for more information on the signs and symptoms of bowel cancer, visit www.Cancer.ie/Bowel or contact the Irish Cancer Society Freephone Support Line on: 1800 200 700. 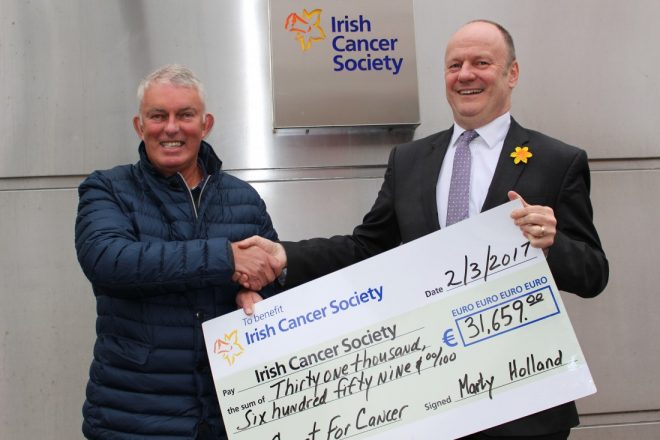 As part of his unique fundraiser, Marty is couch surfing around the country, relying on the kindness of strangers...