A DONEGAL choreographer, who was recently the lead choreographer for the closing ceremony at the Dubai Expo, is carving out an impressive career on the international stage.
Brian Gillespie (30) grew up in Newtowncunnigham and went to school in Letterkenny. He knew from an early age performance and dance was where his heart lies.
Taking time out of his busy schedule Brian spoke to the Donegal News about his achievements to date and how the performing industry is recovering since Covid-19.
“I started at the age of four with Irish dance. I started in Quigley’s School of Dancing and then I went through my teenage years with Letterkenny Musical Society and Dynamic Waves.
“When thinking of career prospects and university it was the only thing I knew that my heart wanted to do.”
London calling
At the age of 18 Brian moved to London and trained between universities in London and Chicago. From there he never looked back.
“I thought I would be a dancer and an actor for years and then choreography took over and luckily being my own boss as a choreographer means I have been able to perform at times as well,” he said.
“My work takes me elsewhere but London seems to be the place that I always come back to. It is the best place for my style of dance and my section of the industry. New York is more Broadway and jazz. London has more edginess to it, we have more contemporary dance here and we’re closer to Europe where a lot of the contemporary dance is coming through.”
Through his company B-Hybrid Dance Brian creates and choreographs contemporary works for theatre, film and TV worldwide.
The performance sector was one of the most badly hit industries during the pandemic and for Brian things changed very quickly.
“When Covid hit all of my projects within six months were cancelled within a week. Within two months at the beginning of Covid the whole year of projects were cancelled so I was left with absolutely no creative projects and no creative space for my dancers,” he said.
“Luckily I had teaching to fall back on and I was able to deliver online master classes. I specialise for those with special needs as well so I was able to reach out to previous clients and fill the diary as such with teaching work.”

The Dubai Expo was Brian’s third creative job in two years and he secured this because he left the UK and Europe to seek it out.
“I got the job last minute. I seen that things were happening in the Middle East so I ended up going in February just on a whim. I went for six days and set up as many meetings as I could and then a week after I got back to London I got a call saying can you come as quickly as you can.”
The Expo is a six-month celebration of creativity, innovation, humanity and world cultures which concluded at the end of March.
The organisers decided to add a dance section into the closing ceremony last minute which was good news for Brian. It was a very quick turnaround and after he received the call on a Tuesday he was on a flight by Wednesday night and into rehearsals on a Thursday morning.
“Once I landed it was straight into meetings and rehearsals. It was a crazy month of no breaks and no respite for the brain anyway because even though I might have had an evening off or a day off my mind was constantly working. It was an intense month but it was well worth it,” said Brian.
“I’ve done big scale events in arenas like this before but they would have been shorter productions or a week of rehearsals and then on for the show.
“ I’ve worked with major brands and major artists before but it has all been individual smaller projects so this has been the first project for me where I was a complete creative lead and there for a significant period of time to create such an epic show.
“It is my job to make sure that we get to that ah-ha moment when things click and it becomes an amazing performance rather than just choreography.” 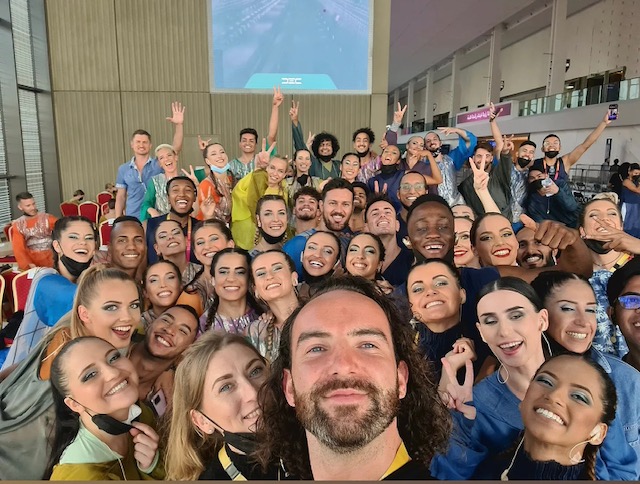 Donegal’s Brian Gillespie with dancers at the Expo

Brian had his hands full with close to 300 dancers taking his lead to make the show such a success.
“When I got contacted the production team already had a narrative as such in mind. They wanted to celebrate all the key moments that had happened throughout Expo in Dubai so they had a few things they wanted to include. It was my job to make sure the moments all stood out but each moment linked into each other well.
“We made sure all these moments were given the credit that they deserve in order to make a cohesive show.”
Looking ahead to the future Brian said he would “absolutely love” to do more ceremonies and events like this as the industry picks itself back up after an extremely difficult two years.
He will also be back in Donegal to work on some exciting projects in the next few months.
To catch a glimpse of Brian’s work in action you can watch the Expo Closing Ceremony 2020 Dubai online at: youtube.com/watch?v=i7e4CdS5gtk).