A DONEGAL bar owner who drove to the Ukrainian border with two van loads of humanitarian aid described the journey as “eerie” the closer they got to the conflict zone.
Damien McIntyre, who owns Mac’s bar in Dunkineely, arrived back in Donegal on Monday after the 5, 250 km journey. He was joined on the expedition by local Garda Niall Bourke, Gerry Walsh and Derek McCabe and they all took it in turns to drive the two van loads of donations.
Speaking to the Donegal News this week, Damien said he was inspired to do something to help the Ukrainian people after seeing on the news the 11-year-old boy who travelled hundreds of miles alone to safety after fleeing the war.
With an 11-year-old son himself Damien said he could not imagine having to leave his child.
After a discussion with his friend Gerry Walsh, a plan started to form. Gerry has a cousin, Dermot Hamilton, who works as a humanitarian aid worker and was able to organise the ins and outs of delivering the aid. 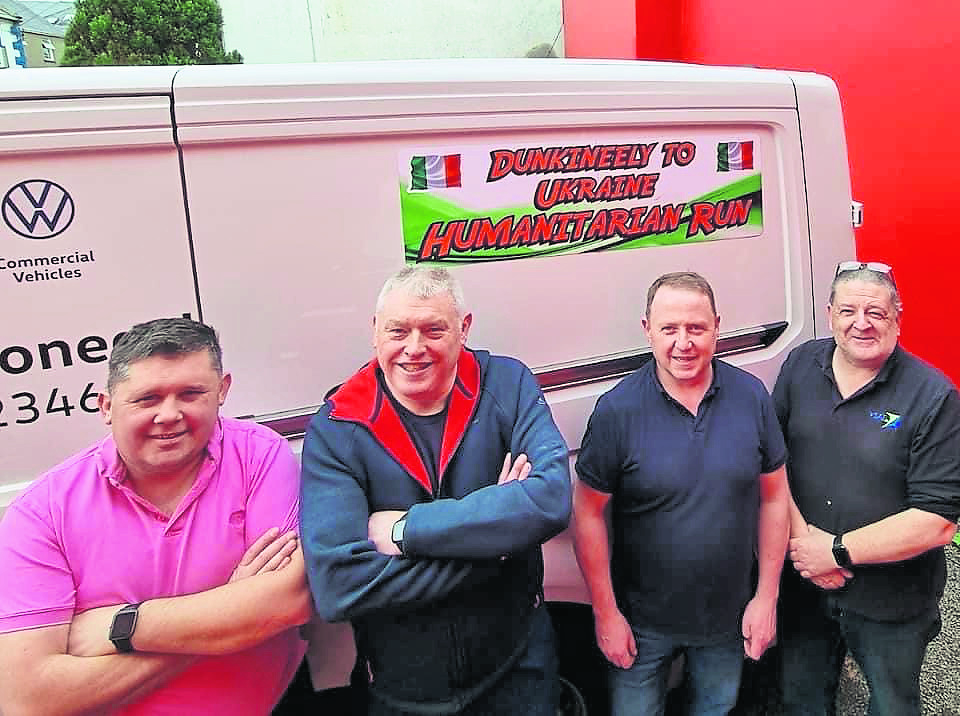 Damien McIntyre, who owns Mac’s bar in Dunkineely, with Niall Bourke, Gerry Walsh and Derek McCabe before they left Donegal.

Damien, who is well known in the community having been involved in the Coast Guard and the Tidy Towns, put a call out for donations and could not believe the response.
“People were coming with van loads and shopping bags, it was unbelievable. Within a week we had two vans full,” he said.
“We set off last Tuesday. We went to Rosslare and got the overnight ferry to Cherbourg.”
They drove for 25 hours to the Polish border at Rzeszow, picking up Dermot en route in Krakow.
“Originally we wanted to try and help on the border but things were changing every day and for security reasons we couldn’t,” said Damien.
“On the fourth day went from Krakow towards Lviv and the last 20 miles were very eerie. There was no traffic coming in or going out. It felt a bit isolated.”
With Russian jets flying above Damien said they felt reassured by Dermot’s presence and his experience in similar situations. They had all the correct documentation which made the journey run smoothly.
There are safe houses along the border and Damien and the team were put in contact with a Polish family with Ukrainian connections. They offloaded the donations, which were itemised and packed into six waiting vans which were driven over the border to help those stranded in Ukraine. “They were so thankful, they couldn’t believe the amount we had,” said Damien.
On Monday, the group arrived home safe to Donegal albeit a bit tired after the long journey.
A Go Fund me page ‘Support & Supplies for Ukraine’ has been set up to cover the diesel expenses and donations will also be made to the charity Stabilization Support Services in Ukraine and the Red Cross. So far over €8,600 has been raised with a target of €10,000.