STAFFING issues at Letterkenny University Hospital (LUH) led to thousands of incidents not being properly logged for months, the Donegal News has learned.
The issue came to light when members of staff alerted the Health and Information Quality Authority (HIQA) which is now monitoring the situation through inspection.
The HSE describes an incident as “an event or circumstance which could have, or did lead to unintended and/or unnecessary harm”.
This could be anything from an allergic reaction, an injury as a result of surgery, a delayed diagnosis, or something less significant.
Letterkenny University Hospital has a two-part process for recording incidents. Firstly an incident is logged on the Qpulse system which is the system used within the Saolta Group to manage the review, investigation and reporting of incidents. The data is then transcribed onto the National Incident Management System (NIMS) which maintains a national database of incidents.
However since last July incidents in Letterkenny were not being logged on to the national database (NIMS). A graph published by the HSE shows that since spring 2021 there was a steady decline in submissions to NIMS and from July there was none at all.
A source told the Donegal News that 3,000 incidents were not properly logged over that period. Saolta staff are now working their way through these incidents and entering the data on to NIMS. The health care group said the issue occurred due to “staffing difficulties”.
The source, who works at the hospital but wishes to remain anonymous, described the situation as “really dangerous”.
“I think staff are all at their wits end about what we can do to make the hospital a safer place. There is no accountability.
“The hospital will always state staffing issues. Not having enough staff is no excuse for this. They didn’t prioritise the work appropriately.”
They claim the 3,000 incidents relate to just one directorate in the hospital alone and there are fears that there could be a wider problem across all directorates.
“The concern is what is happening in one directorate of the hospital could be reflective of failings in all areas of the hospital,” they said.
The HSE graph was contained in the ‘Hospital Patient Safety Indicator Report’ which is published monthly. The most recent report available is from November 2021 which shows the ceasing of reporting of incidents mid-way through last year. In the report the HSE notes “higher reporting rates reflect a positive safety culture”. 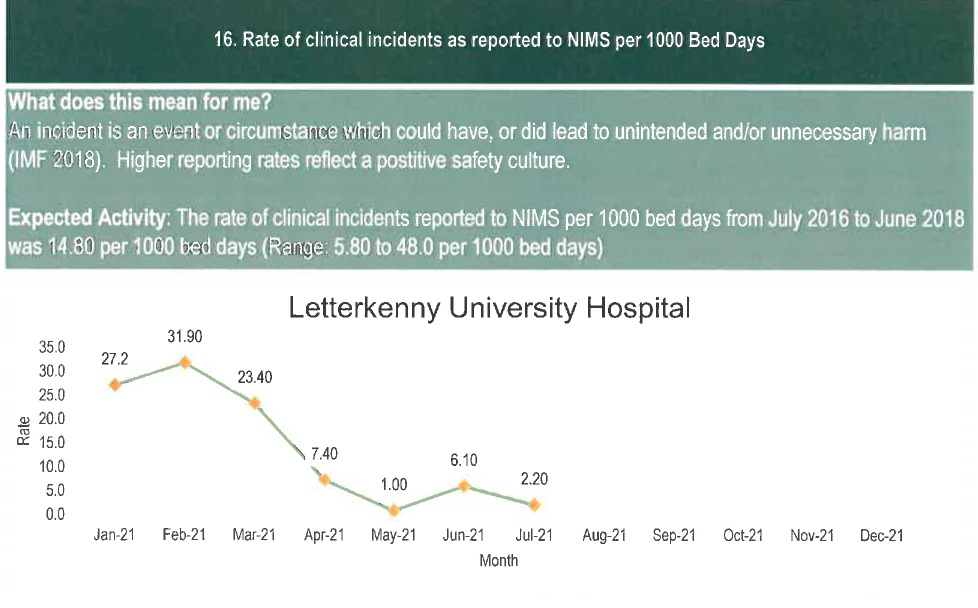 The HSE graph which shows the decline and the end of reporting of incidents to NIMS during the later half of last year.

The failure to log these incidents properly has raised even more questions about clinical governance at the hospital which is already under the spotlight of HIQA.
Last October HIQA published a report which found weaknesses in governance structures and processes and of oversight quality assurance mechanisms at the hospital.
To address the concerns Saolta vowed to bring in an external team to review the hospital’s management and governance. Although initially this was to be an NHS team from Scotland, Saolta recently rowed back on this plan and is instead bringing in a “professional services firm” to undertake the review.
Following questions by this newspaper Saolta said “staffing difficulties during the latter part of 2021 resulted in a delay with data being transcribed to NIMS”.
“This was an administrative issue and did not delay the hospital’s incident reporting and investigation process,” a spokesperson said.
“In order to address this issue a member of staff based in LUH who has Saolta Group-wide role assisted the Quality and Patient Safety Team with entering the data on to NIMS. All new incidents are being contemporaneously logged on NIMS when the Qpulse report comes in.
“The data cannot be transferred electronically between the two systems and therefore requires manual transcription.
“All incidents in LUH are reported/logged to Qpulse and acted upon without delay.”
HIQA confirmed it was aware of the situation and are monitoring the issue through inspection at the hospital.
A spokesperson said: “HIQA is aware of this issue and has engaged with Letterkenny University Hospital on the matter.
“The hospital has provided assurances that they are addressing this administrative backlog and HIQA will continue to monitor the situation through inspection.”