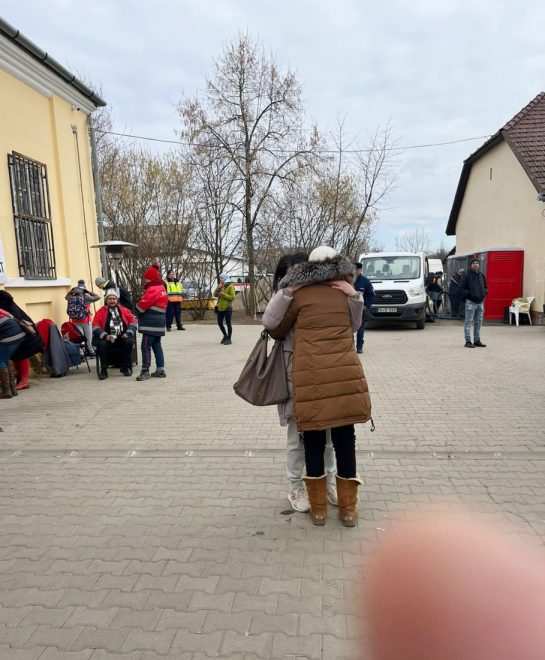 A DONEGAL man has spoken of his heartache and pain watching thousands of refugees cross Ukraine’s western borders.
Paul McGlinchey from Letterkenny was in Beregsurany, a  Hungarian village near the Ukrainian border, yesterday.
Paul and his wife Inga, who had just arrived from Budapest, made the trip to the Ukraine border to collect their friend Julie and her two children Polina and Kiril. Polina (13) is Inga’s god daughter.
There is a steady stream of buses coming into the village carrying women and children who have fled the war in Ukraine.
Since Russia’s full-scale invasion of Ukraine began on February 24, thousands of people have sought safety from rockets and bombs.
“Julie and Inga worked together for years in Kyiv and they’re best friends. Normally, they would speak to each other most days of the week,” Paul told the Donegal News in a telephone call.
“When this was kicking off we pleaded with them to get out of Kyiv but they refused to believe that the Russians were coming – up to and including the morning of the invasion.”
Mr McGlinchey, the former proprietor of the Golden Grill Night Club in Letterkenny, had arranged for Julie and her children to look out for the Irish tricolour.
“We didn’t know how many people would be crossing over the border today so we asked them to look out for the tricolour,” he said.
It’s shortly after midday, Irish time, and Inga and Julie have just met.
“There’s plenty of tears and, to be quite honest, it’s heartbreaking to think that her husband Vadim is less than three kilometres away but he can’t leave the country. He’s a computer expert and I believe that he and his team members are being employed to use their unique talents in a certain direction.
“I’ve just promised his son that I’ll be back for his dad. What else can you say to a child?” he asked.
“They’ve been on the road for the past three days and they’re shattered. I just called into the town hall in the village and there’s hundreds of women and children on bunk beds scattered throughout the place. It’s just soul destroying,” he added.
Hungary has received more than 150,000 people in the past week. All along the 135km frontier, volunteers from across the country have travelled to the border region to help with the impressive humanitarian effort.
“Residents of the town are supplying tea and sandwiches while there’s plenty of volunteers, interpreters, medics and the Red Cross on hand to offer assistance. It’s great to see.”
Paul and Inga were driving Julie and her two children to Budapest yesterday afternoon.
“We should be back in Budapest around 5pm Irish time. We’ll stay there overnight and then get a flight to Barcelona tomorrow before I take them down to Valencia where I have an apartment. They’ll stay there for as long as it takes,” he said.
“Julie and her family lived on the wrong side of the river in Kyiv. They lived on the eastern side and had to travel for six hours before they could cross a bridge over to the other side as all bridges are manned by the Ukrainian army.
“They then headed west towards the Hungarian, Slovakian and Polish borders. They’ve been on the road for three days. They’ve seen the bombs and the destruction. It’s been a harrowing experience and one they won’t forget in a hurry. Hopefully this war won’t last too long and common sense will prevail, but I’m not too sure,” he said.
Inga is originally from Transnistria, a narrow strip of land between the Moldovan and Ukrainian border. She’s a lawyer.
There was better news for the couple the previous day with confirmation that Inga’s son Igor had received his Irish passport.
“Inga was afraid that he might be dragged into the army so we brought him over here when he was sixteen. PCC Falcarragh welcomed my step-son with open arms as did Maynooth University where he secured a degree in computer science. He now works with Canada Life. His mother got the best possible present on International Women’s Day with news that he got his Irish passport yesterday.
“It’s fitting that we’ve just collected a mother and her two children and, hopefully, they and people in the same situation also get the equivalent of an Irish welcome wherever they might end up,” he said. 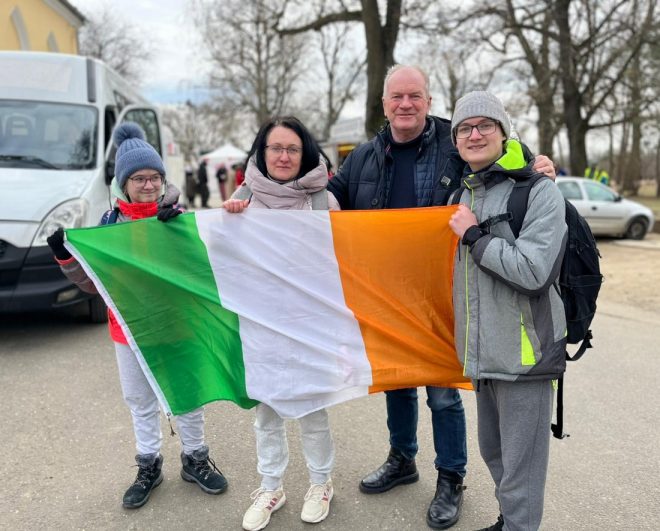 Paul McGlinchey pictured with Julie and her two children Polina and Kiril in Beregsurany, a  Hungarian village near the Ukrainian border