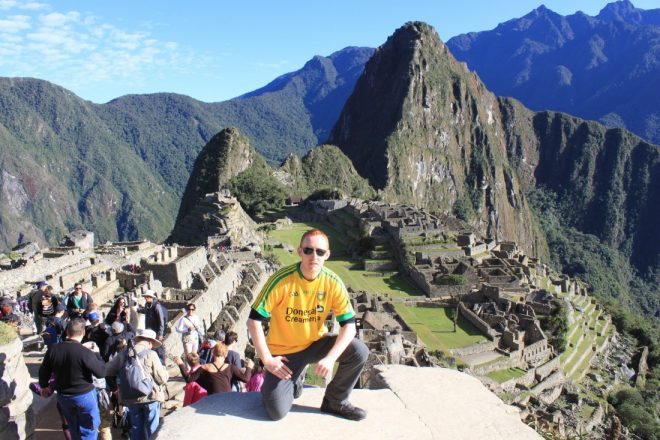 Charlie McGee wearing the Donegal colours on a visit to Machu Picchu.

A Donegal man is in charge of keeping the lights on in the country!
Charlie McGee from Baltoney, Gortahork, is System Operational Manager (Ireland) at EirGrid.
He is responsible for managing the day-to-day operations of the National Control Centre (NCC) for electricity which is responsible for matching electricity production to customer demand on a 24/7 basis, 365 days a year.
A past pupil of Pobalscoil Chloich Cheann Fhaola (PCC), Mr McGee has been with EirGrid, formerly known as ESB National Grid, since graduating from UCD with a BE (1st Hons) in Mechanical Engineering.
“I celebrated my twenty-year work anniversary last year,” he noted.
The eldest son of John and Carol McGee, he has two brothers, Johnny and Denis, and all three attended Caiseal na gCorr National School.
“Five of us from the same class in PCC went on to study engineering in UCD – one did civil, another did electronics while three of us did mechanical – and we’ve all done quite well,” he said.
Over the past twenty years Charlie has built up deep technical knowledge through a variety of jobs within EirGrid.
These include being the senior lead engineer in both the transmission network and technology and standards department before becoming manager of the Transmission Outage Programme for the Republic of Ireland. He took on his current role as System Operational Manager in March.
“We operate the national electricity grid, so that everyone has power when and where they need it. Basically, it is our job to keep the lights on in the country,” he said.
The grid takes electricity from where it is generated and delivers it to the distribution network, operated by ESB, which powers every home, business, school, hospital, factory and farm on the island. They also supply power directly to some of Ireland’s largest energy users.
“We are responsible for a safe, secure and reliable supply of electricity: now and in the future.
“To do this, we forecast when and where electricity is needed across Ireland: hour-to-hour, day-to-day, and year-to-year. We work to ensure there is enough electricity for industry to prosper and for employment to grow.
“The primary objectives are to operate the system as economically as possible, maximising the use of renewable generation while maintaining safety, security and continuity of supply at all times,” he explained,
EirGrid is committed to producing up to 80 per cent of its electricity from renewable sources by 2030. Donegal is already a net exporter of wind-generaed energy with approximately 430 Megawatts (MW) of wind generation currently installed across the county.
Two of the biggest wind farms in the country are located in Donegal – Mulreavy (94 MW) and Meentycat (85 MW) while the four hydro generators at Erne (Cathaleen’s Fall) in south Donegal have a total capacity of 66 MW.
The wintertime peak electricity demand in Donegal is in the region of 150 MW. It generally occurs in the evening (5:30pm/6pm), mainly driven by the combined impact of electric heating, lighting and cooking.
Peak electricity demand in summer is a lot lower – in the region of 115 MW.
“Donegal fares well in terms of renewable generation. We don’t have any gas, coal or oil plants so it’s all clean. The wind energy generated in Donegal would be comparable to a large conventional generator like Whitegate in Cork or Huntstown in Dublin,” he said.
The peak demand at any given time across the country would be 4,000 MW. The all-time peak demand was 5,300 on December 8, the day after Storm Barra left thousands without power across the country.
“At this point we have well over 4,000 MW of wind generation installed and, at times, we have more power than we can take. We have done really well in integrating renewables,” he said.
To help ensure there are no issues with security of supply, Mr McGee and his team are constantly moving power around the system making sure it doesn’t get overloaded and keeping power flow within safe limits.
“We do that through a state of the art energy management system which allows us to monitor the grid from the NCC control room,” he explained.
The winter months are the busiest  for EirGrid and the management system is very important during storms.
“It gives us information from every substation and power station from across the country and allows us to respond in real time to remotely switch things in and out,” he said.
Looking to the future, Mr McGee admitted that more power lines will be needed to boost the country’s overloaded electricity grid.
A €1 bn upgrade was announced by EirGrid before Christmas included two Donegal projects; a 125km line from Clogher to Srananagh in Co Sligo, and a 40km line between Binbane and Cathaleen’s Fall.
“We’re seeing the need for extra capacity in Donegal to cover the increase in renewable generation coming down the tracks,” he said.
At present, Donegal has an 110KV connection across the border, into Strabane.
“If we need help on our side then we coordinate with our counterparts in Belfast to organise a flow of power across into Letterkenny and visa-versa,” he said.
Until recently, all electricity generated had to be used but industrial size batteries are helping it to be stored and put back onto the grid when needed.
Asked to recall any major challenges, Charlie mentions Storm Darwin in 2014.
“Storm Darwin knocked out the power in most of the South West but, touch wood, I’ve had no major brown-outs or black-outs to deal with. We have lots of defensive measures in place to make sure it never happens but everything is possible,” he said.
“I did get a call from mum and dad one day to ask me why the power suddenly went out in Gweedore,” he laughed.
When he’s not working, Charlie enjoys adventure travel. He has visited North Korea, Chernobyl, the West Bank, Lebanon and Ethiopia. He is also considering a trip to Brazil this year.
“I like to adventure travel as far away and as crazy as possible,” he laughed.
As long as he remembers to make sure the lights stay on at home.