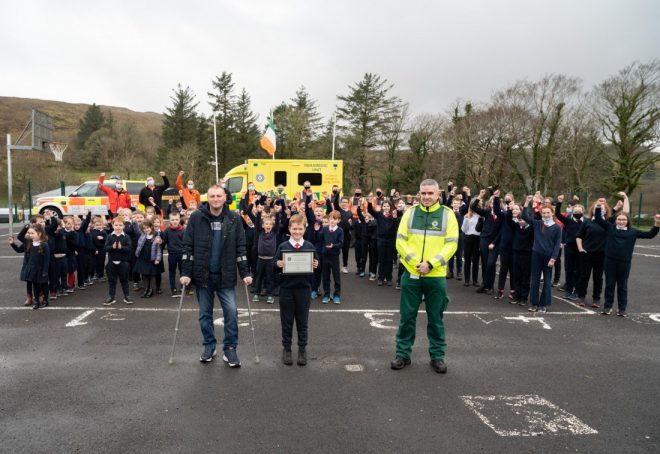 THE National Ambulance Service (NAS) has praised the bravery of ten-year-old Owen Cunningham from Kilcar who raised the alarm when his father fell off a cliff last November.

Owen raised the alarm after his father Seamus sustained injuries when he fell off a cliff on 16th November 2021 while working on farm fencing. Realising the danger his father was in and not having a mobile phone with him, Owen ran home and raised the alarm before cycling back to his injured father and waited for help to arrive.

His father was treated for his injuries by NAS staff including a paramedic and Advanced Paramedic from Killybegs Ambulance Station and subsequently airlifted from the scene by the Coast Guard R118 helicopter.

Those who attended the incident were impressed with Owen’s calm and brave response and wanted to acknowledge this with a certificate of bravery, which was presented to him at Kilcar National School earlier today.

The event was attended by NAS Staff, including the Advanced Paramedic and Paramedics who attended the call, coast guard volunteers who assisted in the rescue along with the Coastguard R118 crew who also attended the incident.

Praising his son’s bravery, Owen’s father, Seamus, added: “I’m very proud of Owen… the outcome could have been much worse. He is a very brave boy. It took a lot of guts for him to do what he did. He stayed with me the whole time.”