AS DEBUT seasons go, Kieran Tobin enjoyed an excellent one with St Eunan’s in 2021.

Tobin played minor and Under 20 football for Donegal, and yet his forceful performances for ‘Eunan’s in the championship still took many by surprise.

He established himself as a key component of the team in the half-back line and was steady throughout the championship.

The defender wasn’t over-awed by the big occasion and saved his best performance of the season for the county final.

Tobin scored two super points in that game and his important turnover led to the crucial St Eunan’s goal.

He was named as the Man of the Match in the Donegal News, and was also selected as the Sports Personality of the Month award winner for November, in conjunction with Brian McCormick Sports & Leisure.

Tobin collected his prize this week in Letterkenny, and reflected on a special few months as he got his hands on the Dr Maguire Cup for the very first time.

“I don’t know if I appreciated it enough at the time but there’s been a bit of reflection over the last few weeks, and it really was a fantastic achievement,” said Tobin, who only turned twenty on Tuesday.

“We were aiming towards that for the full year and it was a massive dream for the club and for myself.

“Looking back on it now, it was just an unbelievable time and hopefully it’s the first of many.”

There was plenty of competition for places within the St Eunan’s camp last year, but Tobin was intent on holding on to the starting jersey when given it.

He admits that ‘Eunan’s struggled to hit their top level at times during the championship, but there was always belief in the dressing room that they could land the title.

“We were scrapping over the line in a few games and we weren’t playing our best football.

“It’s hard to believe that we won the championship when you think back to losing our first game (against Kilcar).

“But that was a building block for us really. We knew we had more chances and we got three gritty results in the group.

“We had to go down to Termon and put in a massive performance there.

“But I think it was those games which really pushed us on. We learned a lot from all those matches.

“We felt we had a great chance regardless of what anyone else was saying,

“Within the camp, the belief was massive.”

Tobin caught the eye in the county final, and he was to the fore once again in the Ulster Preliminary Round against Watty Graham’s of Derry. 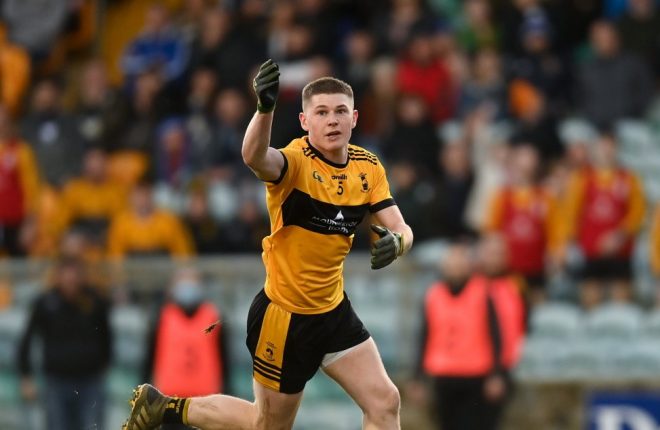 He was keen to get on the ball and try and make things happen, and the wing-back landed a lovely point in the second half.

Unfortunately, his side were just edged out by a point and there will be some regrets over that defeat.

Glen went on to ease past Scotstown and Kilcoo only beat them after extra-time, so St Eunan’s were in the mix with the best in the province.

“It was tough – you were up another step again.

“Teams before maybe neglected the Ulster Championship but we knew ourselves that we wanted to give it a serious rattle.

“We got the preparation done and we went into the game fairly confident.

“They were pushing teams aside fairly handy in Derry, but it was a tight game.

“The rub of the green maybe didn’t fall for us and things went against us.

“We were very disappointed after it. We made mistakes that didn’t help.

“It was a massive stepping stone for us and hopefully we can learn from that defeat going into next year, and it will be something to work on in the future.”

St Eunan’s would love another crack at Ulster, but the nature of the Donegal SFC means it’s not possible to look too far ahead.

Kilcar, Gaoth Dobhair and Naomh Conaill have all lifted the Dr Maguire Cup in the last five years, and each side will feel they have the players to reign supreme again.

St Eunan’s are no longer the pretenders but that means that teams will be looking to shoot them down.

“I think the other three teams in the so-called big four clubs are all looking for new management teams, so they are all going to be coming in fresh this year with different ideas.

“There will be men coming in looking to do a job.

“It will probably have to be a different approach for us this year. We will be going in as champions and everyone will be looking to take a bite at us.

“We are going to have to up our game again. We’ll be looking to retain the title but it’s going to be a massive challenge.”

Tobin had a fine year for the Donegal Under 20s last year, and he will be back involved with that team again this season.

They were all important players and won’t be easy to replace.

However, Donegal will have a league campaign to try players out before gearing up for a jaunt at the championship.

“A lot of last year’s panel are still underage this year which is a big boost.

“There’s a good few minors from last year and the ’03 age group as well that will definitely be adding to the squad which will really help us.

“It was very disappointing last year to fall to Monaghan the way we did.

“There’s definitely potential there. If we can get on the training field and put the work in, we could give Ulster a good rattle.”

Tobin is a Business student at LYIT, and is involved with their Sigerson Cup squad, and it won’t be long before his club commitments start back.