Advertisement
HomeBreaking NewsFriends hoping new business takes flight
Advertisement
TWO friends are hoping their new venture converting aeroplane components into office and living pods takes off in west Donegal.
Aeropods is the brainchild of Kevin Regan and Shane Thornton, owners of leak detection company NW Water Services.
They began making glamping-style units from discontinued jet parts last year after being alerted to the idea by a third party, but what started as a personal interest has quickly developed into a new business.
The two former builders have begun producing the pods on a commercial level and plan to open a manufacturing plant close to Carrickfinn airport later this year.
Revealing how the project came about Kevin, who lives just outside Bundoran and whose wife Catherine is Director of Nursing in Donegal Hospice, said,  “Shane and I thought we would do one each for own gardens. But everyone we showed thought it was a fantastic idea so we did a website and someone put it up on LinkedIn. It just went crazy from there with over 200 phone calls and queries in no time at all.” 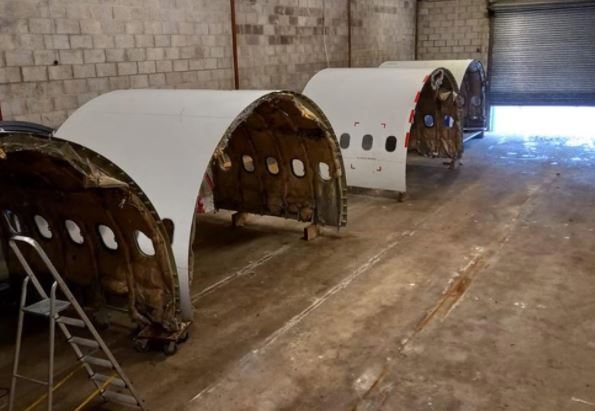 How one of the pods starts out before being transformed into something truly special.

Such was the interest that Kevin and Shane decided to throw themselves completely into it.
They sourced a decommissioned Airbus 370 which had belonged to an Indian airline but which was subsequently bought by a firm in Cardiff. There the craft was broken down into separate parts.
Aeropods in turn purchased the sections they needed and quickly established a manufacturing base between Carrick-on Shannon and Boyle in Leitrim.
“They are all the real McCoy and a very high end finish,” said Kevin.
“They won’t rust and the internal walls and floors are fully insulated. The doors are double glazed and the rooms are wired with USB sockets, heaters and even LED lights.”
Despite only being six months old, the Aeropods company has already sold four units.
Among its customers is Terry Clune, owner of global VAT solutions provider Taxback.com and The Clune Tech. He has bought two for the various business functions he conducts. A third has been bought a customer in Dublin who previously was paying to rent office space.
“We have plenty of connections and sources so we can do bigger than the five window units. In fact we recently did a price for a GAA club in Monaghan who are considering the idea for their club house. 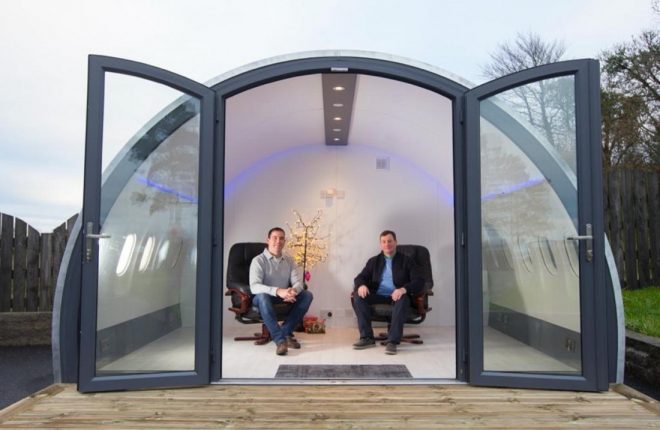 Aeropod founders Kevin Regan and Shane Thornton enjoying the fruits of their labour.

“There are other things we can do too, for example living accommodation, a two-bed en-suite with kitchenette. Again these are the five window sections but we can do a 20 window section if requested.”
Kevin admits that it is “very early days” for the fledgling company and that the base in Leitrim was born out of necessity more than anything. Long term though and the duo have Donegal in their sights with jobs to be created.
“This was only set up because things happened so quickly and got ahead of us a bit. But I have a holiday home a very short distance from Carrickfinn airport and the plan is to move things up there.
“We are only starting and the plan is to definitely ramp things up.”
For further information, log on to https://aeropods.ie/