A teenage golfer who grew up playing in Dunfanaghy will be swinging his clubs in the United States next year after securing a college scholarship.
Luke Kelly is from Belfast but has played for Dunfanaghy Golf Club since he was ten. The now 18-year-old has been offered a four-year scholarship at Oakland University in Michigan where he will study business management. There he will play his golf with the Golden Grizzles, the college’s team and winners of the 2021 Horizon League.

Oakland has some of the finest golfing facilities in Michigan with two championship courses and a $3.5 million indoor practice unit to be added over the next year.
For Luke it will mean competing nationally against the best student athletes in the USA while also earning his degree.

“I had a good summer last year and did well in a few events. From that a coach got in touch through social media, we did a few calls and he offered me the scholarship,” said Luke.

While the opportunity of a lifetime for the up and coming star, it will also be long way from where it all began – along the Donegal coast as a youngster with barely a care in the world.

“I would have taken him over to Island Roy where I would have hit a few practice balls,” revealed dad Paul.
“He loved that and such was his imagination that he would have created these mini-bunkers in the sand. This was when he was about four so he had a set of plastic clubs that he called ‘the whackers’.”

From Island Roy, Luke progressed to McColgan’s Pitch and Putt before transferring his focus to Saturday morning sessions at Dunfanaghy Golf Club run by Brian Dolan, James Sweeney and PGA professional Seamus McMonagle. The format was that youngsters played nine holes before taking part in a putting competition. If it was a tie then the players faced off over the 18th hole.

“He was in there every Saturday, even in the middle of winter. It was a fabulous environment to learn in and for Luke it was his first real competitive introduction to golf,” said Paul.

Where some clubs tend to frown on the junior leagues, Dunfanaghy did exactly the opposite. They encouraged players like Luke to get involved and to compete against their seniors at every opportunity.

“It really developed his passion for the game and he carries that same work ethic to this day.”

Those early days under the tutelage of people like Seamus McMonagle have stood the 18-year-old in good stead. In an already impressive career he has developed into one of the finest junior golfers in Ireland with three Donegal Youth Championships with Dunfanaghy under his belt. Add to that two All Ireland pennants, an Ulster U16 Championship, Irish Boys U17 Championship and overall Irish Boys runner up in 2020. Luke has also represented Ulster at U16 and U18 level.
With such a CV it is no huge surprise that he has caught the eye of scouts in the USA. And from September dad Paul will be monitoring his son’s progress as he competes for Oakland.

“Paul McGinley would be a big friend of Dunfanaghy Golf Club and he takes a big interest in the junior ranks. He has often talked about how important getting an education is and that is the beauty of this scholarship, it combines both education and sport.”
Luke said he can’t wait to explore the Oakland fairways.

“It will be good to compete against such good players and we’ll see how it all goes. The plan is to enjoy the four years and hopefully at the end of it I will be able to play golf professionally. If not we’ll see what happens but I’m looking forward to getting out there and enjoying it.”

Thanking those who have helped him reach the level he has, the talented teenager added that it was “100 per-cent” down to the team at Dunfanaghy.
“Myself, James Sweeney, Conor Hanna, we have all been there since James’s dad James Senior started us off. And without him, Brian Dolan and Seamus McMonagle, none of us would be where we are today.” 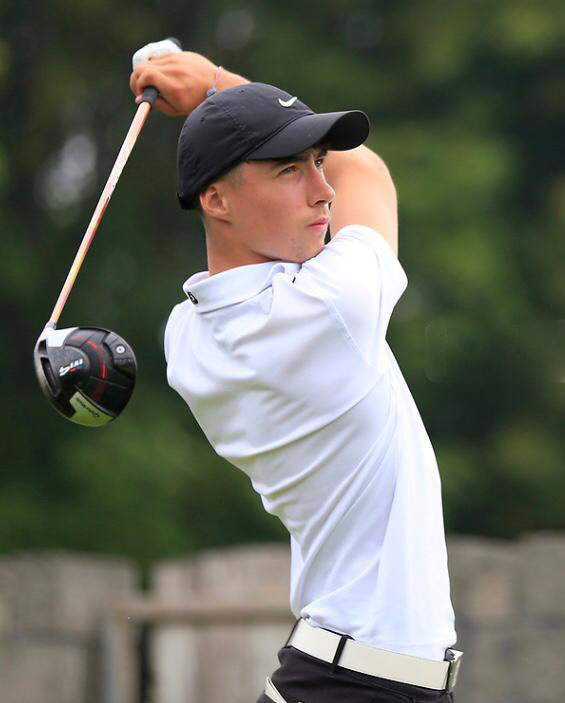 Luke Kelly in full swing. From next September he will be playing his golf for Oakland University in Michigan

Praising the progress and commitment of the Belfast man, Dunfanaghy Golf Club added that they too are looking forward to seeing how he gets on in the USA.

“This will be the first time in many years that our club has produced a US Collegiate athlete and is a great testimony to the junior programme put in place ten years ago by Brian Dolan, James Sweeney and PGA professional Seamus McMonagle,” said a club spokesperson.
“Currently playing off a +3 handicap we hope that Luke can go on a emulate the achievements of one of his heroes and another junior who learnt his trade on our links, Paul McGinley.

“We wish Luke all the best in the US and look forward to following his progress at the top level of college golf.”