Advertisement
HomeBreaking NewsCharity taking pro-active approach to cashless era
Advertisement
A prominent Letterkenny charity is adding a tap-and-go facility to its collection boxes in a bid to move donations into the cashless era.
Mary’s Meals volunteers have just taken possession of two devices which will allow members of the public to contribute even when they have no money physically on them.
“So many people are not carrying cash any more,” said Fr Eamonn Kelly, Chair of the Mary’s Meals Ireland Board.
“When we are collecting on the street people will often say that it’s a good cause but that they don’t have any money on them.
“This way we will still have our normal collection boxes but on the box will be a facility that will allow people to donate money straight from their card.”
A move towards a cashless society has proved problematic for many organisations that depend on people digging deep, among them the church.
In the Archdiocese of Dublin members of the clergy have just struck a deal with Californian paytech firm Clover to introduce ‘tap-and-donate’ devices. The machines will be installed in 200 parishes in Dublin and east of the country in an effort to combat plummeting collection plate income.
Fr Eamonn Kelly said the idea has been discussed among church officials locally but that no decision has been taken. He added though that he would be in favour of any system that makes it easier for people to make their donation. 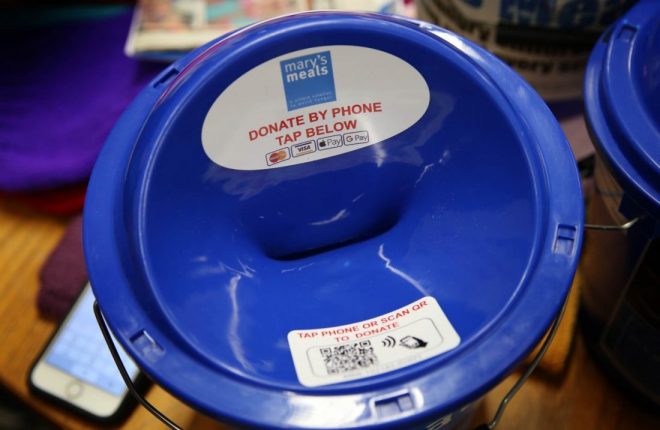 One of the new Mary’s Meals collection boxes with the QR code for added convenience.

“The church hasn’t done anything official yet but I can’t see it being very long before it happens.
“Personally I would be in favour if it makes things more convenient because at the end of the day fewer people, particularly young people, are carrying cash.”
Banks charge for coinage so cash does have it costs. No longer having to pay those charges will be a major advantage of tap-and-go. But Fr Kelly added that he does see some potential pitfalls.
“There are lots of advantages in the sense that the money goes directly into the charity’s account. A disadvantage though might be that if it is raining people are not going to be bothered going into their wallet or purse for a card. Before they would have just thrown a few coins into the box.
“Also, the person collecting likes to have an idea of what they have collected. With this new system you won’t know what a person has donated.”