Advertisement
HomeSportGAABattle of the ‘string-pullers’ could prove decisive
Advertisement

Being the most vulnerable member of a team, the only ones we ever really remember with egg on their faces, they have to be.

The eccentricity gene commonly shared means they are risk-takers. Traditional Gaelic football stoppers, those from a different time and place, had a much more tranquil existence. You booted the ball as far as you could and you did your best to stop it going in the goal.

However, the manner in which the role of the ‘keeper has evolved in recent times means a real individual light has now been shone on their so-called madness. And the best are usually categorised by just how far they’re willing to go to embrace all of that deranged potential.

If Croke Park was an asylum, Rory Beggan and Niall Morgan would be the ones currently wearing straight jackets after the way they looked to accelerate the goalkeeping evolution during the summer. But in the Tyrone man’s case, so much risk resulted in so much reward.

Shaun Patton deserves to be mentioned in the same breath as that pair. Under a microscope, he’s probably much more comparable to Stephen Cluxton. His dispatches have the ability to cut deep but like the Dublin legend, there is a more measured approach to how he goes about his business from general play.

He has the potential to be the great equaliser in the weekend’s Donegal Senior Football Championship decider. Naomh Conaill – with all their experience, guile but most importantly form – rightly go into the game as heavy favourites.

But there are chinks in every armour and just because the likes of Gaoth Dobhair and Kilcar couldn’t pick them off in recent weeks, it doesn’t mean that St Eunan’s can’t or won’t in MacCumhaill Park. And it’s no revelation to say that Glenties are going to be dealing with something completely different in the form of the St Eunan’s and Donegal No. 1.

In conversation with the Black and Amber custodian, none of the obvious or lazy goalkeeping clichés instantly stick. The dices he rolls off his goalkeeping tee, the gambles he takes, more often than not throw up sixes. But all of that is in complete contrast to the individual away from the pitch.

He’s very calm, polite even. But it probably shouldn’t be a surprise that someone as effective as he is, at what he does, has that kind of demeanour. And there is no doubt he has the ability and potential to have the ultimate influence on this game.

“I look at Naomh Conaill and you can only admire how they’ve dominated club football in Donegal in recent times,” he said on Martin Regan’s men. “They are so strong. They are dogged and they just have this hunger. They are a top quality side with so much talent. But there is nothing soft about them. There is a real grit to how they go about their business.

“I firmly believe we have a lot of talent in our squad as well. The thing that probably sets Glenties apart at this moment is probably experience. Our panel is still maturing but that is a gap that can be bridged. It’s going to be a massive battle. But it’s one we are up for.”

A cerebral operator, he has to be given the manner in which he can manipulate both time and space from his dispatches, Patton believes Naomh Conaill’s great strength is their game management. They can instantly change things up and it doesn’t need any real coaxing from the sideline.

“Look through the names on their team sheet. When they have those seasoned players, it just takes a little adjustment to snuff out danger that might be building. And that leaves it hard for other teams to build up a head of steam. Even the younger lads they drip feed in, they are learning from some of the very best.

“There is no doubt we’re going in as underdogs. But it’s not something that really concerns us. In the past two years, our games with Glenties have been so close. They were fine margins of a point here or there. We’re aren’t far away I feel. But we need to bring a level and challenge that deserves to win the game if that makes sense.”

It’s hard to believe that St Eunan’s last lifted the Dr Maguire back in 2014. Once the dominant force in the north west, they’ve had to transition a large haul of underage players into the senior set-up over the last few years as some very notable servants faded into the background.

Boss Rory Kavanagh as well as management team member Conall Dunne know exactly what it’s like to be king. And a cluster of others like Caolan Ward, Eamon Doherty, Conor Parke and Sean McVeigh have also reached the Promised Land.

However, Patton feels that a SFC win in 2021 would mean so much more to all of the aforementioned individuals than that last triumph did six seasons ago.

“Yeah – when you’re starved of success it would taste all the sweeter I’m sure. I look around the town and even for the supporters, there just feels like there is this real and palpable interest and excitement there.

“There aren’t many players in the panel that would even have played in a SFC final, never mind won a medal. It’s been a difficult time for everyone with the pandemic. Supporters are back in and there is just a buzz about the place. When you look at what the hurlers did last weekend and the ladies before that, we have a wonderful opportunity to cap off what would be a dream season for St Eunan’s. With the players we have, there is no reason why we can’t. But we are under no illusions. We’re going to have to really step up to the plate because you can guarantee Glenties will be at their usual level.”

But again, that opinion is formed from an ‘outside looking in’ perspective. He’s a joker without a doubt. And like Eoin Waide explained on these pages a few short weeks ago, the Naomh Conaill custodian is one of the squad’s real characters. There is the ponytail and a liking for long under-armour which might make you wonder just how serious he really takes the whole thing.

However, when you actually examine how he goes about his business, there isn’t anything cavalier or careless about it.

“I’ve watched him and he’s very impressive,” said Patton on his opposite number. “He’s very calming and he’s a massive part of what Naomh Conaill are about. He has presence. He’s been so consistent. I can’t recall any real mistake to be honest.

“I watched him against Kilcar and he was one of the lads driving it on. When the side has that confidence in the man behind them, it just makes things so much easier for the other 14 out the field.”

If you’re looking to talk to anyone outside of the official press night, events where players and managers are dragged to against their will, kicking and screaming; then goalkeepers are probably your best chance. 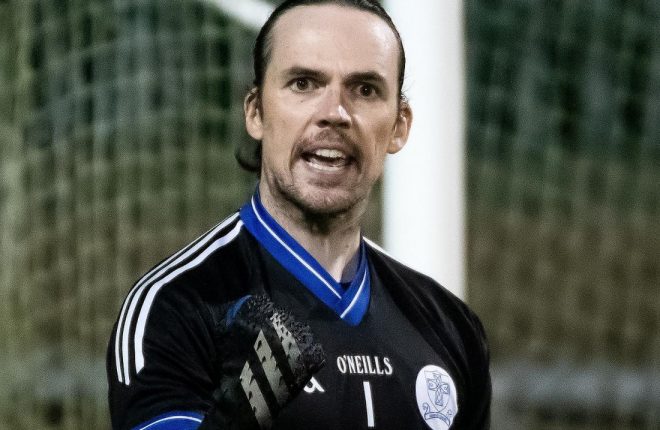 There would be absolutely no point texting an Anthony Thompson, Leo McLoone, Eamon Doherty or Caolan Ward this week. They’d politely decline the opportunity to chat, but decline it nevertheless.

Thankfully, goalkeepers are a law onto themselves. They walk to the beat of their own drum. And it would be very interesting indeed to hear what beats Glenties stopper McGrath tunes into before the action commences. I’d imagine it would be something heavy, with plenty of guitar solos.

Like Patton, he fields a call no problem on the week leading into the county final. And he doesn’t have to ask permission from his manager. Goalkeepers are to be cherished. And there is no doubt that Naomh Conaill hold their goalmouth guardian in seriously high regard.

McGrath is candid and very high in his praise for the man that will stand at the opposite end of the pitch from him at the weekend.

“You talk about levels and Shaun is right up there with the best in the country. No one would dispute that. He has the ability to boss a game if he’s let. He has that boomer kick that can bypass midfield even. He can got short and long. It takes a particular kind of thinking. But it’s up to us to prepare for all that. At the same time, you can’t obsess. We have to give them something to think about.”

You get the sense that McGrath and Naomh Conaill take great pride in outworking the opposition. They just don’t go away. Ask Gaoth Dobhair and ask Kilcar. In the physiological warfare stakes, that realisation has the potential to cripple and even paralyse sides when games go right to the wire. Glenties have continued to dig deeper and go to places others simply can’t or won’t travel.

“St Eunan’s are a serious outfit. They are young, energetic and they’ll love that they are probably slight underdogs here. I wouldn’t read too much into the last few meetings. They were different games with different things going on. They’ll feel they are really close to making a breakthrough.

“We certainly know we’re in for an almighty battle at the weekend. And if we don’t press, harry and empty ourselves into every single ball then we’ll come up short. Talent will only get you so far.”

McGrath says the relevance of the ‘three in a row’ and the pursuit of that little bit of history is an extra motivator ahead of Sunday.

“That carrot… it would be massive for the club. But a county title is still a county title and we are desperate to land it again. And one would take care of the other in that sense. There is huge motivation there on a number of levels.

“People talk about favourites tags, hunger and other things in regards to football. But I remember looking at the betting before the quarter-finals and we were the fourth favourites. We were behind Eunan’s at that stage. The way it’s being talked about now you’d think we were tipped from the very off.

“So there is always motivation and reminders of little things like being written off. Championships aren’t being handed out easily in Donegal and that’s why it remains so special. In our squad, everyone of us has someone breathing down our necks. Everyone puts in that dog work. And when you get success because of that work, it remains the real motivation. Cherish it and don’t take it for granted. It won’t always be like this. And it could be taken away at any time.”