The streets of Dublin came to a standstill this afternoon as thousands of mica protesters marched through the capital to demand 100 per cent redress from the government.

Their calls echoed across the city at Custom House where campaigners and politicians passionately spoke about the crisis.
The message was very clear to government TDs in the affected counties that they must resign if they fail to deliver 100 per cent redress for every crumbling home.
Campaigner Paddy Diver warned TDs not to dare come knocking on their doors again if they do not get this over the line.
Campaigner Eileen Doherty heavily criticised the release of the figure of €3.2 billion by the government as the estimated cost to fix mica homes.
“Where did they come up with this estimate given that we nor they have any idea of the scale of the true cost,” she said.
“These figures were released in conjunction with the narrative that this isn’t their money that this is in fact the people’s money. Let’s be clear we are also tax payers.
”We are not spongers, we have bought and built our homes ourselves we have done nothing wrong.”
Ms Doherty said the true human cost of the crisis is best measured by the sleepless nights or worry, the anxiety, marriage breakups and the childhoods lost because of mica.
Mayor of Donegal, Cllr Jack Murray described  it not as a protest but as a revolution.
“This is a tsunami that can’t be stopped and we will get 100 per cent redress,“ said Cllr Murray.
Cllr Martin McDermott said families can’t go on any longer and spoke about how difficult it is for homeowners to access the scheme.
Sinn Fein leader Mary Lou McDonald called for Taoiseach Micheál Martin, Tánaiste Leo Varadkar and Green Party Leader Eamon Ryan to visit Donegal and see first hand the devastation.
“Having seen all of that how could you look at yourself in the mirror if you are not prepared to do right by these families. It’s a matter of fairness and justice,” she said.
Minister for Agriculture, Charlie McConalogue was unable to speak over the booing until MAG campaigner Ann Owens stepped in and called for the crowds to show the Fianna Fáil politician  respect.
Minister McConalogue said he knows the responsibility is now on the government to deliver a scheme that replaces their homes and fully delivers 100 per cent redress.
He said the real test will be the scheme itself which he said will have to stand the test of time and replace many homes over the years to come.
There was also a frosty reception when Fine Gael TD Joe McHugh stepped up to the mic. He  spoke of his last conversation with the late Cllr Bernard McGuinness about mica and pledged to the crowd his 100 per cent support.
“Let’s finish the job, let’s get it done,” he said.
Donegal TD Thomas Pringle criticised the report presented to the mica group last week and said it was not worth the paper it was written on.
He paid tribute to Deputies McConalogue and McHugh for being there to address the crowd but said they now need to see delivery.
He said the government are dragging their heals but warned the people of Donegal are not going away.
It was Luke ‘Ming’ Flanagan that gave the crowd their voice once again when he called for the government TDs to resign if the protesters do not get what they were looking for. 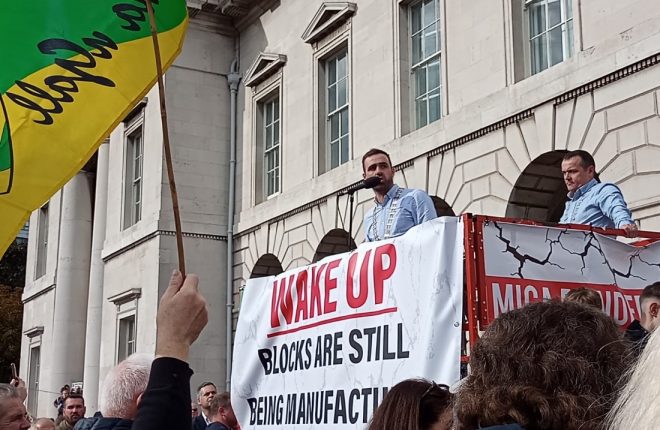 Mayor of Donegal, Cllr Jack Murray described the protest as a “revolution” 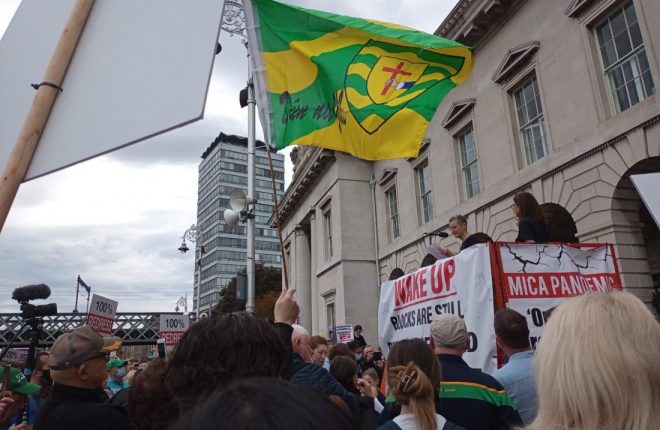