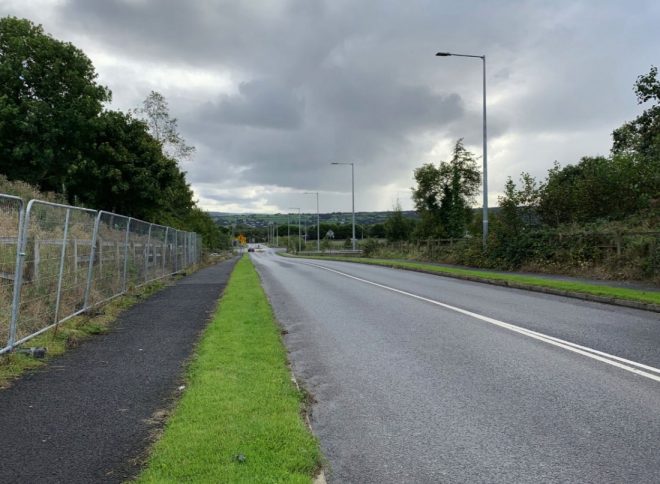 DONEGAL County Council has granted permission to E&I Engineering to construct a new entrance onto a road adjacent to the former Unifi site at Lisnenan.
The plan, which allows for the retention and completion of the construction of a new HGV entrance to service the existing factory including new entrance gates and boundary fencing at Lisnenan, was given the green light by planners last week.
It comes just one month after the Donegal News reported that work was progressing on a major project to redevelop a section of the former Unifi site.
E&I Engineering, which has headquarters in Burnfoot, was acquired recently by Ohio-based Vertiv, a US based infrastructure solutions and services company, for around $2 billion.
Industry sources say that the company has plans to turn the old Unifi Plant (two) facility into an engineering manufacturing business. The company has  made no comment on its plans.
The modern industrial / warehouse facility with ancillary offices, comprises approximately 17,651 sq m (190,000 sq ft) on 15 acres of the overall site.
The Unifi plant, which made yarn and had up to 900 employees in the town, closed for the last time in 2004.
Since then, a number of different proposals have been made for the site.
Founded in 1986 by Mr O’Doherty, E&I is a leading independent provider of electrical switchgear and power distribution systems.
In total, the company has around 2,100 staff globally and has been in Burnfoot since 2004 where it employs over 1,000 people.