Advertisement
HomeBreaking NewsPublic urged to attend mica protest in Lifford tomorrow
Advertisement
AHEAD of a protest in Lifford tomorrow campaigners say only people power will secure 100 per-cent redress for mica families.
Guest speaker at the demonstration will be Paddy Diver, the man credited with sparking the mica movement that brought thousands of people on to the streets of Dublin in June.
Helping organise Saturday’s event, which starts at 2pm, is Lifford man Fearghal Mac Lochlainn whose own home is crumbling due to the presence of mica.
“I tend to not let it bother me personally but it’s there and it’s not going away anytime soon. I’d be more concerned for my wife and family but we try to play it down as best we can. At the end of the day our home is crumbling around us and our hands are tied, we can do nothing about it,” Mr Mac Lochlainn said.
Paddy Diver will give an update on talks to secure 100 per-cent redress for all those whose homes are disintegrating. He is also expected to announce that unless certain guarantees are given, a second protest will take place in the capital next month.
“There is not one person in Donegal at the moment who doesn’t know someone whose home is affected by mica,” Fearghal Mac Lochlainn said.
“We are hoping that people will attend Saturday’s protest to show their support for families and to show their disgust at the way in which the government and local authorities are treating these families.”
As things stand the government is offering 90 per-cent redress to families whose homes have to be refurbished or rebuilt. However that does not cover out-buildings or retaining walls. Campaigners also say 90 per-cent does not allow enough money per square metre to rebuild homes nor does it take into account the cost of relocation to alternative accommodation. 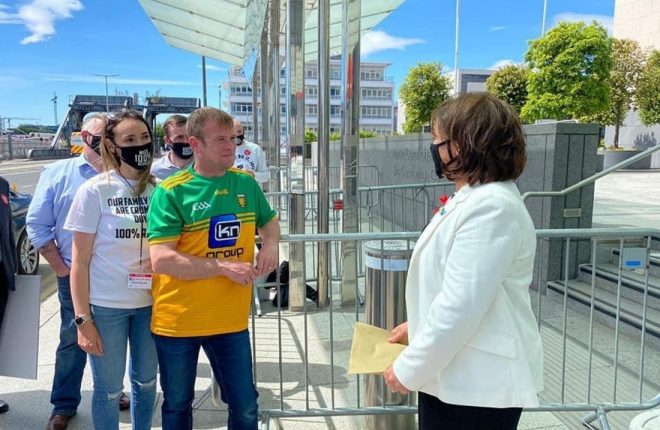 “Once these homes are rebuilt families will have to start redecorating an empty shell. Where does this money come from?
“What the people of Donegal are calling for is equality. If 100 per-cent redress is good enough for Dublin then it should be good enough for us,” said Fearghal Mac Lochlainn.
The mica issue has been around for years but was initially thought to be confined largely to Inishowen. That has proven not to be the case however with homes throughout the county, and particularly in East Donegal, now known to be impacted. There is also growing evidence that the scandal has spilled over into Derry and west Tyrone.
“Nobody really knows the full extent of damage these blocks have done nationwide. That is why there should be a full scale public inquiry into this scandal and those involved brought to justice,” said Mr Mac Lochlainn. 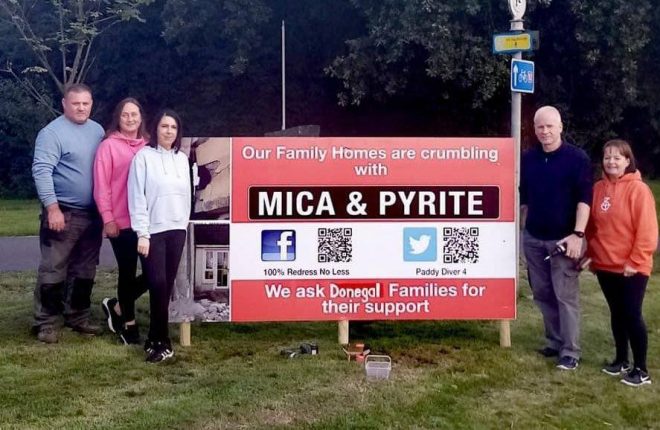 On Saturday people are being asked to assemble at The Diamond in Lifford at 1.30pm. At 2pm sharp the protest will set off on a small march to the bottom of Croghan Heights where the stage will be set up. At 2.30pm there will be speeches after which the march will return to The Diamond, this time going down the main road past new Daly’s filling station.
Attendees are being asked to wear masks where possible and maps of car parking are being circulated on the Lifford Mica Demonstration Facebook page.
“We urge Donegal to come out and support the mica families. People power will see this over the line,” Fearghal Mac Lochlainn added.