Advertisement
HomeBreaking NewsLetterkenny woman recalls friends lost in 9/11 attacks
Advertisement
AS a weekend of memorials commences to mark 20 years since 9/11 a Letterkenny woman has recalled the friends she lost in the attacks.
Evelyn Curran worked in the World Trade Centre for seven years from 1990 until 1997 before returning to Donegal. She watched in horror four years later as the buildings were obliterated, killing several of her former colleagues.
“I started working with insurance company Guy Carpenter on October 15, 1990 and we were based on the 54th floor,” said Evelyn.
“I was very lucky to get the job and I was there until I decided to come home in June 1997.
“When the attack happened I was working in Letterkenny and I remember it so clearly, I was coming down the stairs just after lunch when someone said there was a phone call from America for me.
“It was a friend of mine in Philadelphia who had heard the news. In those days there weren’t many computers in the office connected to the internet but we turned on one of the screens and saw the buildings collapsing.” 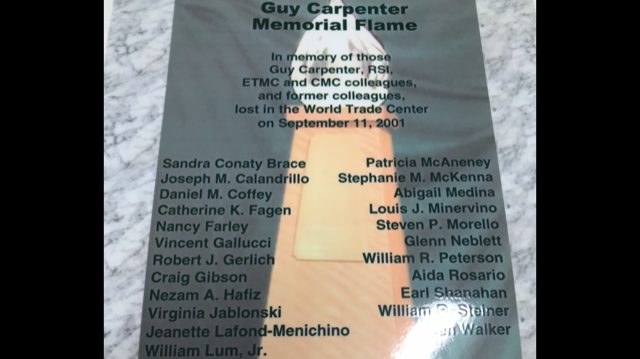 The Guy Carpenter Memorial Flame listing those lost in the 9/11 attacks.

The 9/11 bombings were not the first attacks on the World Trade Centre. Eight years earlier a truck bomb was detonated below the North Tower killing six people.
“I was there in 1993 so I had all these memories of that. But when I saw the footage on television in 2001 I just couldn’t believe they did it and the destruction it caused.”
Guy Carpenter and Company occupied seven floors of the World Trade Centre and the names of 23 people are listed on its September 11 Memorial Flame.
Evelyn Curran knew ten of them personally – Vincent Galluci, William R Peterson, William Lum Jr, Patricia McAneney, Stephanie McKenna, Louis J Minervino, Stephen P Morello, Earl Shanahan, Catherine K Fagan and Daniel M Coffey.
“These were people I knew very well, two in particular I worked very closely with,” she said. 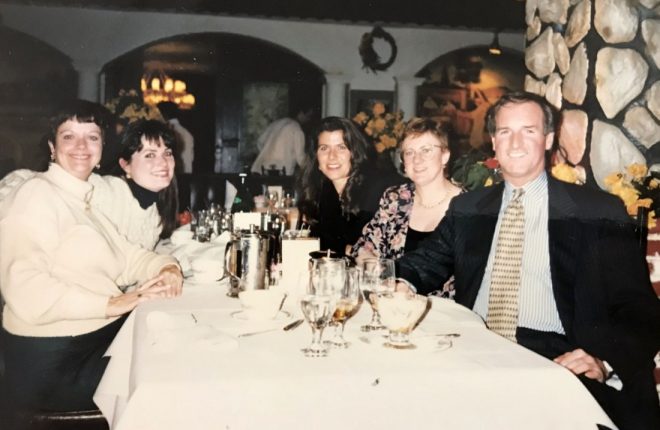 Evelyn (second from right) with some of her Guy Carpenter colleagues.

One very personal detail the Letterkenny woman recalls is how she and her female colleagues often wore trainers to work before changing to more formal footwear. When the planes hit staff were forced to abandon their heels and literally flee for their lives in their bare feet.
“These were some of the best friends I ever had and I still cry at times when I see the footage. I still get overwhelmed. It broke my heart that day and it still breaks my heart today, especially when you consider where the world is now and the possibility something similar could happen again.”
Evelyn has been back on several occasions to the site where her workplace once stood and where so many of her colleagues lost their lives on an ordinary Tuesday two decades ago.
“It’s something you never forget and it’s hard to believe it is 20 years since it happened,” she added.