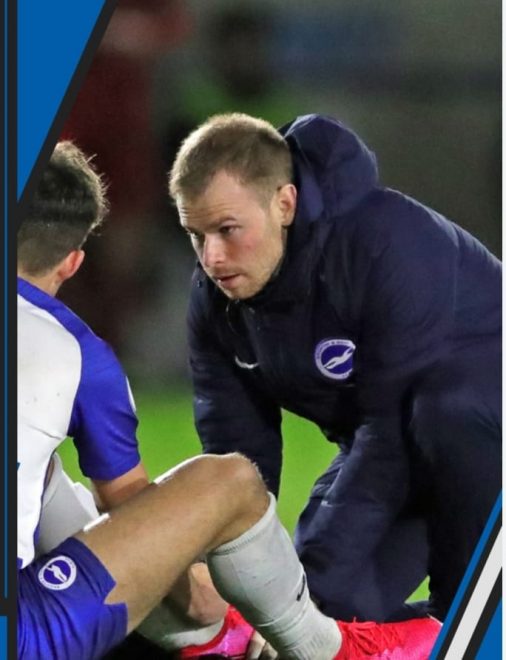 BRIGHTON & Hove Albion have enjoyed an impressive start to the new Premier League season.
The Seagulls scored a last minute winner to beat Brentford 1-0 last Saturday, a result which leaves them sixth in the table.
Letterkenny man Jack O’Doherty is first team performance physiotherapist at Brighton and he’s hoping that the 20021/22 season will be a memorable one, both on and off the field.
Jack (32) always wanted to work in a medical profession, and physiotherapy. After graduating with an Arts degree from NUI Galway, he returned home to work in Letterkenny for a period before going to study physiotherapy at Manchester Metropolitan University.
After graduating, he initially worked full-time in the NHS alongside a part-time role in academy football at Manchester City. He loved working in football and was lucky enough to be offered a full-time job as academy physiotherapist with Nottingham Forest.
Within months he had moved to Brighton and continued his education with a master’s degree in sports and exercise medicine, whilst progressing through a number of roles to his current one of first team performance physiotherapist.
Earlier this week, Jack O’Doherty talked to the Donegal News about the club’s impressive start to the new campaign from the medical and performance team’s perspective.
Jack is one of a team of four physiotherapists, one soft tissue therapist and osteopath who work with the first team squad at Brighton.
There is a huge emphasis on injury prevention but when they do occur it’s down to Jack and the medical team to ensure the player is rehabilitated as quickly and safely as possible.
The advent of GPS within training and games has allowed the medical team to monitor each player’s training load – tracking how far each player has run, how quickly, and how many times they have accelerated and decelerated.
At the training ground, Jack starts work at 8am and generally finishes at 4pm but he also travels with the team, so those hours can be a little more unsocial.
“At any given time I’ll have one or two players doing rehab work and I’m with them on a daily basis while I also take on other work around the squad as they train.
“On a match day I’m one of three physios that travel with the first team – home and away – and we share the jobs between us. One will do the run on stuff that you see on the television while the others are helping out in the background.
“That might entail having to go back into the dressing room with an injured player or sitting behind the dug-outs looking at a live feed and relaying information down to management pitch side,” he explained.
Ahead of last Saturday’s game against Brentford, Jack was charged with strapping up ankles and providing rubs to a number of players.
“Each player has their own routine and superstitions and they like to come to the same person for strapping and rubs. We travelled to Brentford on the Friday (night before the game) and stayed in a hotel. A few hours before kick-off we’re kept busy getting the players right,” he said.
Brighton players and staff fly to games anywhere north of London which cuts down on travelling time.
The youngest child of John O’Doherty and Dr Maria Murray, Cornagill, Jack has two sisters Róisín and Claire and one brother Peter.
A former winger with Ballyraine Schoolboys team, he’s honest enough to admit that Brighton won’t be looking for his signature any time soon.
“You realise just how far these boys are ahead when you work with them every day. We get to spend a lot of time with them and know them quite well. It’s important to have a connection and a good working relationship. Sure they’re worth a lot of money but at the end of the day they’re just normal fellas,” he said.
A keen Republic of Ireland supporter, Jack is delighted that two Brighton players – Shane Duffy and Aaron Connolly – are part of Stephen Kenny’s current squad.
Ireland matches
“I went to matches with dad when I was younger and Ireland has always been my main interest, football wise. It’s good to have a strong Irish connection at Brighton. There’s a lot of Irish lads involved in the academy as well,” he said.
Like many, Jack also has a ‘soft spot’ for Manchester United. While he admits that getting the chance to run onto Old Trafford later in the season would be ‘nice’ he would much prefer if his services were not required on the pitch that particular day.
“I’m enjoying my time here. It’s a very well run club. I was lucky enough to come into work with the academy four and a half years ago – the year the club got promoted – and they’ve gone from strength to strength ever since.
“Their ambition is to push on in the league and they’re investing more and more money into the club’s infrastructure. We have a brand new gym and a training complex that rivals most Premier League teams. We’re doing the right thing and we’re trying to progress, both on and off the pitch.
“Personally, I’m lucky to be working with a lot of people with great experience. They’ve worked in numerous sports and they’re on top of their game. It’s great to be able to go into work every day and have the opportunity to learn from these guys,” he said.