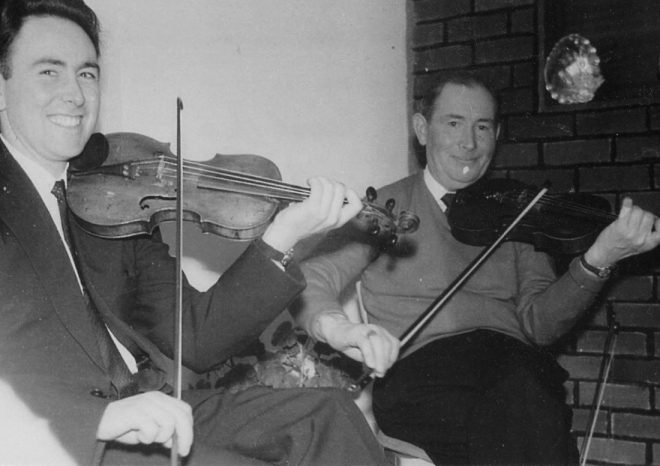 MUSIC recorded from a house party in Ballybofey more than fifty years ago has been brought to life in a new CD.

Tapes of the music, which was recorded in 1964 not long after Gillespie emigrated home from New York, were discovered by accident.

Frank, who lives in Killygordon, was a great friend of Hughie’s and has championed his music since Hughie’s death in 1986. His partner Rita Gallagher take up the story.

“They were recorded playing together in Hughie’s house in Carrickmagrath, Ballybofey, back in 1964 by a man called Geordie McIntyre from Glasgow. Years later he turned the recordings over to the ITMA (Irish Traditional Music Archives) in Dublin,” she explained.

By Random chance, at the Inishowen Singing Weekend in 2011, Rita and Frank met Geordie and his wife Alice while walking on the Pollan Beach in Ballyliffin.

“We got talking and during the conversation they asked where we lived and I said The Cross which is near Ballybofey. Geordie said that he was up there a long number of years ago recording a man called Hughie Gillespie and there was another fiddle player there the same night called Frank Kelly. I said well there’s Frank Kelly beside me,” she recalled.

“That was how we got the recordings as he sent them on to us. Initially he had made recordings of about three CDs but Jessie Smith, an American fiddle player who lives in Arranmore, wanted to get a CD released of Hughie and Frank playing so we condensed them down to be this one recording,” she added.

Back in the 1960s Hughie and Frank regularly played tunes together and visited each other’s houses a few times each week.

“Frank was always a pupil to Hughie the way Hughie was a pupil to Michael Coleman. We would never knew these recordings ever existed if we hadn’t got talking by pure chance on the beach that day. They were turned over to the ITMA and Frank didn’t even remember he was recorded that night,” she said.

“It’s fantastic to have them. I’m delighted for Frank who is more delighted that Hughie is now getting some kind of publicity and recognition. The good thing about this CD is that it’s a home recording and there’s a little bit of Hughie talking on it.

“He sings two songs, including the Johnston’s Motor Car song that was written by his cousin Willie Gillespie, and it gives us a little glimpse into the man,” she said.

Frank continues to play the fiddle although, due to Covid, there’s no live music sessions at present.

A number of years ago, Frank released a CD entitled ‘Memories of Hughie Gillespie’. Originally released as a cassette in 1996 with the Liam Deery from Ballybofey accompanying him on guitar it was re-released as a CD a few years ago to coincide with the first anniversary of Liam’s death. 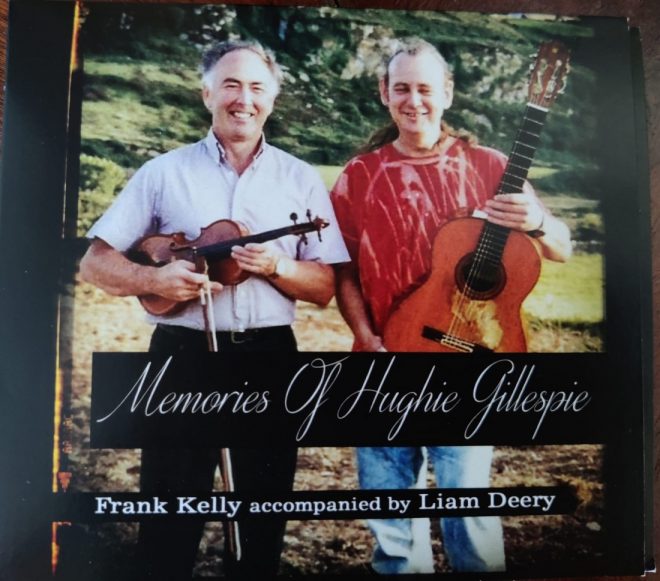 The cover of Frank Kelly’s CD ‘Memories of Hughie Gillespie’