Standing at the doorway of her home, she shyly looks down the street, her gaze directed to the man taking a photograph that will become an iconic one in the history and heritage of Letterkenny. The photographer, Robert French, is capturing an image of an individual on a cart led by a horse making its way down the Church Lane. And there is the young girl, Winifred Graham, taking it all in, an event in her lifetime when visiting photographers may have been that rarest of sights.

On Tuesday morning, 120 years on from that French connection, another native of the town is also taking it all in. Gazing back over a century to the image, now depicted on a mural at No. 2 Church Lane, and with particular attention on the youngster in the photograph. For 96 year old, Nell Crumlish, it’s an image that may indeed form part of the Lawrence Collection but is also very much at home in her family album, her mother, Winifred, now permanently enshrined on a mural that is at the heart of the regenerated Church Lane.

Nellie cuts the ribbon to officially unveil the image – the expertise of photographer French matched (surpassed?) by the remarkable work of artist, Ciaran Dunlevy, who has helped bring the old street to life.

Comparing the Church Lane now with how it appeared not too many years ago, you would have to believe that the effort to restore it was a mammoth task. And so it was – and some.

“A very proud moment for us all,” declares Donnan Harvey, Cathedral Quarter Secretary, and the man who initiated those efforts and put in days, months and years to get the project where it is today.

In his introductory remarks at this week’s unveiling, he refers to the dream of former Letterkenny councillor, Jim Lynch, who around thirty years ago envisaged the regeneration and renewal of the Church Lane. There were many meetings of the Urban District Council when he put forward proposals and suggestions for the revamp of the street and the establishment of craft stores and cafes and other businesses in keeping with the environment.

It’s a vision that is well on its way – Jim highlighting Ciaran Dunlevy’s magnificently crafted mural, creating an atmosphere as it was back in the early 1900’s.
The mural represented the past and the past going forward, says Jim who implores the attendance at the unveiling to imagine what life was like on the old street back in the distant days – worshippers from the Gospel Hall walking with prayer books in hand, Red Coats making their way to the Mass Rock site, horses and carts conveying the sandstone from Mountcharles for the building of St Eunan’s Cathedral, and the clanging of a hammer on the anvil in the blacksmith’s forge.

The Cathedral Quarter committee had got fired up to help preserve the area’s heritage for generations. “It was a long, hard journey lobbying and campaigning and it’s not the end of the story,” he insists.

The committee, which once went under the umbrella of the Save the Church Lane campaign, had been initially disappointed with the lack of response from a number of agencies who should have been leading the strategy and not being led, he says. But Donegal County Council, under the guidance of planning official, Eunan Quinn, and the county’s Heritage Officer under Joe Gallagher, had helped the project along.

There had been concerns, the former councillor points out, that the properties could have been purchased and demolished but through the huge perseverance of Donnan Harvey, the threat had been erased and the work to restore the historic old street continued.

“Cultural Tourism is the future of Letterkenny though there are people who will argue that the future centres on new shops and shopping centres.”
And if there’s heritage to be preserved, there should be a Heritage Minister along to help promote it and there was in the form of Malcolm Noonan, T.D. who tells the attendance that he has been following the work of the Cathedral Quarter in Letterkenny for some time.

“What you are doing here is vitally important,” he maintains.

The enactment of a scene from the Hiring Fair, performed earlier by members of the Elusive Theatre group, underlined the stories of the area and organisations such as the Cathedral Quarter had a critical role to play in the retention of old town centres. Projects such as this were helping to bring communities back together again, the Minister relates.

There was also the possibility of mixing this heritage in with that of social housing and giving families places to live.
On the mural itself, the Minister is fulsome in his praise. “Ciaran has done an incredible job, you’ll all agree.” And the warm – on the day that was in it highly appropriate – round of applause for the artist indicates that everyone did agree as indeed has everyone who has passed this way since the artist completed it.
“I’m looking forward to the project evolving,” the Minister concludes. 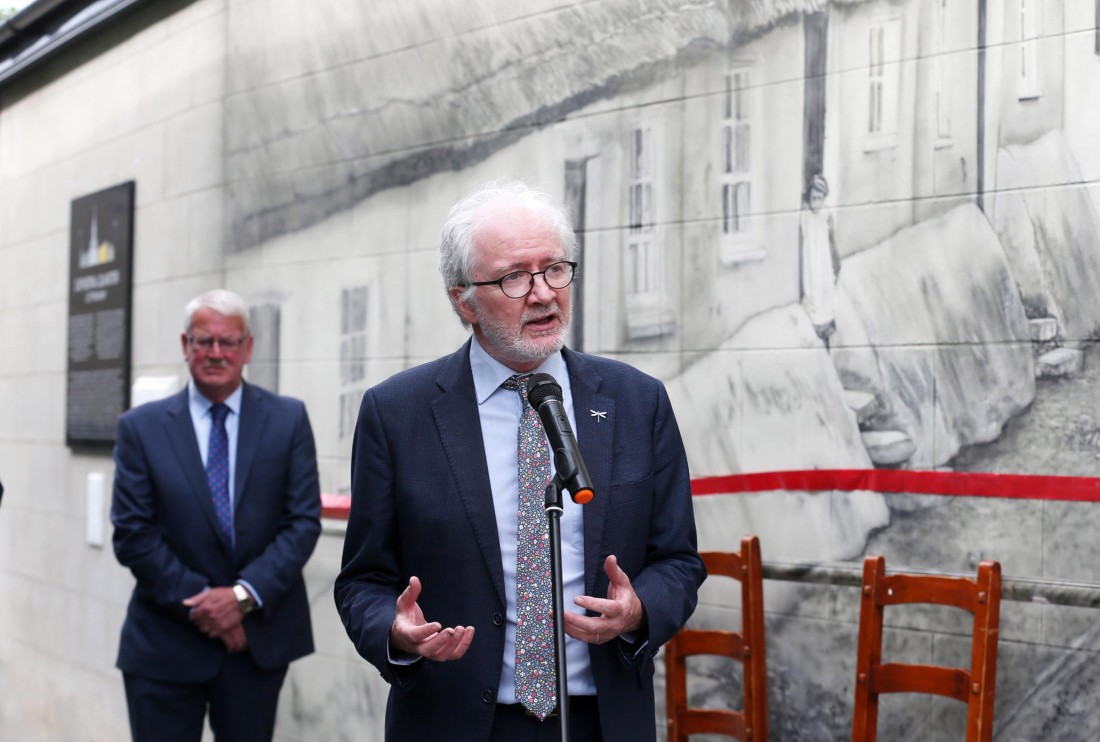 Heritage minister Malcolm Noonan, TD, speaking at the unveiling of the plaque and mural.

Words, too, from Maria McCormack, but this time in the way of a song, the singer performing ‘The Church Lane Song’ which she co-composed with Paul McGill aided by Amanda Clarke. “You can see what Letterkenny can be, breathing new life back into the old,” two of the lines go.

And new life has undoubtedly been breathed into the Church Lane and the Cathedral Quarter and the mural and plaque – the work of Tony McCaul and itself unveiled by councillors Gerry McMonagle and Donal Coyle – pointing to the iconic photograph taken by Robert French at the turn of the 20th century underlines it. Also on the plaque, a listing of all those who had played their part in bringing the overall project along and continue to do so.

“Very proud,” Nell nods her head before taking her leave in the company of her niece, Marette.
And young Winifred Graham looking on, never realising well over a century ago when she stood on the top step of her Church Lane house that one day her image would be up on the gable wall of No. 2….