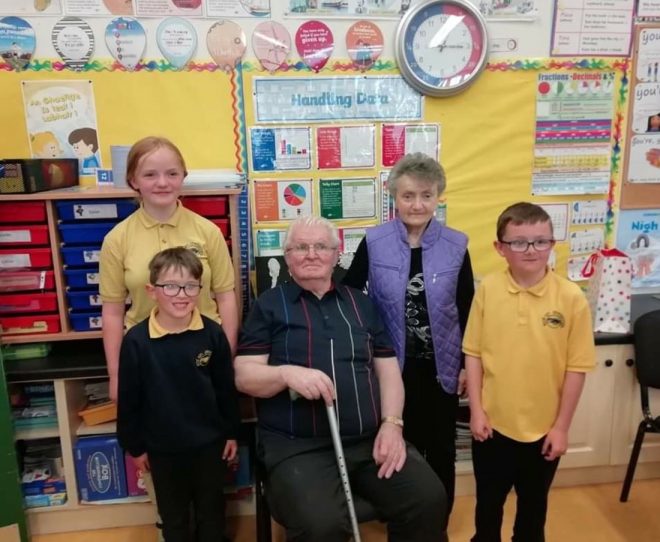 WHEN the wheels on Earley’s bus came to a stop last month it marked the end of an era.
After 51 years of driving school buses in Ardara, the husband and wife team of Johnny D and Greta Earley are officially out of the driver’s seat.
It all started when Johnny D took over the Brackey school bus run from Con Gillespie in 1970. He was told at the time the work probably wouldn’t be steady and he didn’t plan on doing it for long but he ended up staying behind the wheel for nearly five decades. Following Johnny’s retirement seven years ago Greta took on the bus route, maintaining that proud tradition of driving generations of students to and from school.
On the final day before the summer holidays, Greta drove her last bus with the three remaining students home from school before starting retirement – wrapping up the family business in the process.
Speaking to the Donegal News, Johnny D remembered that he was one of four drivers who started the local school runs in 1970. He was joined by Danny McHugh, Peader McGeehan and Jim McGuinness.
“When I started out big Paddy McGill was the head master in Brackey and over the years I’ve watched the young children go on to become parents themselves and, in some cases, grandparents,” he recalled.
The comprehensive school in Glenties has been part of the schedule for more than thirty years while they also ferried children to school in Gortnacart and the Point too.
“We built up the business and did school runs and school tours while local clubs hired us for away trips,” he said.
While Johnny drove the local Ardara GAA club he was also their coach and trained them to the County Senior title as well as numerous underage successes. Greta has hardly missed a day since she started driving the school bus 30 years ago.
“Johnny took them to school in the morning and used to take them home in the afternoon. Since Johnny retired seven years ago I was doing the double run. Before that, I would do the runs on the wee bus,” she said.
Greta celebrated her 70th birthday last week.
“I’m just glad that my health held out and I was fit to take the boys and girls to school each day. I don’t remember missing a day through snow although the frost did mean that the children did stay at home on occasion.
“This is the end of Earley’s buses but I think we’re ready to take things a little bit easier,” she said.