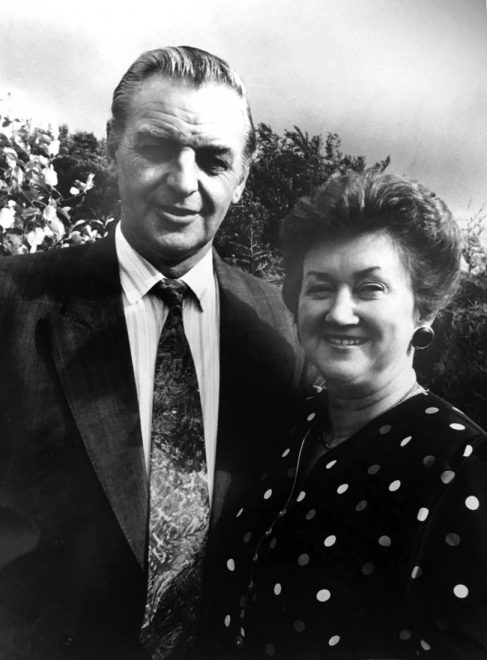 The late Frank Grimes and his wife Barbara.

THE owners of the Four Lanterns Fast Food Restaurants are celebrating five decades of successful trading in the food business.
The late Frank Grimes set up the landmark takeaway in John Street, Sligo, in May 1971, alongside his three brothers before expanding into Donegal where they continue to serve residents in Letterkenny, Buncrana and Donegal Town today.
His youngest son, Oran, this week paid tribute to the takeaway boss, who inspired their careers and a man who was named Letterkenny Business Person of the Year 2002. A hugely generous sponsor of many teams and clubs, Mr Grimes was one the best known and respected members of the local community. He passed away in July 2012.
“Dad was a Mayo man but he loved Donegal and Letterkenny and was at home here. He was a good businessman and handed down his work ethic to us all but, most importantly, he was a good dad, husband and grand-dad,” he said.
The past 16 months have been difficult for the Grimes family due to coronavirus restrictions but they are looking forward to extending opening hours in the coming weeks and welcoming a new generation of customers to mark their golden jubilee.
Today the business is run by the late Mr Grimes’ five children, Kevin, Sean, Oran, Marie and Edel who each have their own responsibilities.
While the business started out as a sit-down restaurant there are very few people in the North-West who haven’t sampled a Big 4 or Snack Box from “The Four Lights” (as it is affectionately known) over the years.
The eldest of seven sons, Frank Grimes, who was a native of Ballinrobe, Co Mayo, had been working with the forestry in Donegal when his brother Vincent first saw the potential for setting up a restaurant in Sligo. 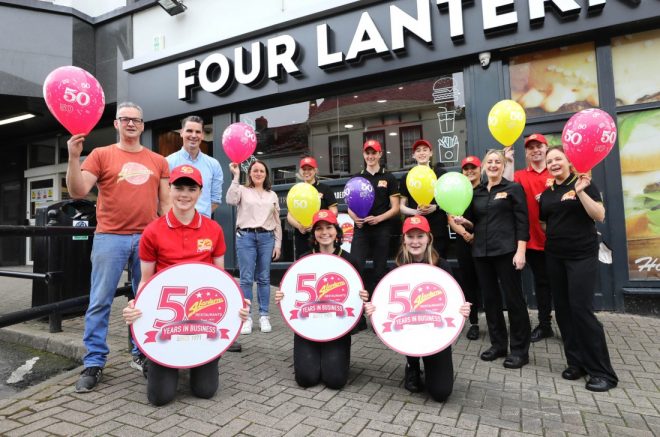 Fifty and proud..Members of the management and staff of the Four Lanterns, Letterkenny this week.

Advertisement
FINE DINING
With the support of their parents, Frank, Vincent and two other brothers Gerry and Paddy, invested in their first outlet in Sligo – a fine-dining restaurant.
“Vincent had been working on the sites in England and bought a load of catering equipment and asked the boys would they be interested in opening a restaurant in Sligo. Their parents weren’t too happy as they all had pensionable jobs but supported them,” Oran said.
The restaurant on John Street went so well that some renovations were needed but as they didn’t want to lose out on custom they opened a hatch to serve take-away food.
“When the lovely refurbished restaurant reopened they found that the hatch was busier than the restaurant and the takeaway business was born,” he explained.
The four brothers had no experience in the fast food business but they travelled to the UK and America to watch how the likes of Wimpy, McDonald’s and Kentucky Fried Chicken ran their operations.
“They wanted to make themselves stand out and decided to get into fried chicken and big burgers. They bought fryers and breaders from a factory in Wisconsin and brought them home.
“Men came over from the States, installed them and trained staff how to use them but nobody came in to buy fried chicken off the menu because no one knew what it was and they ended up going out onto the streets with their uniforms and caps on and giving it away,” he said.
Before too long, word started to spread as the Snack Box and Big 4 secured their places in the fast food dictionary and the reputation of the 4 Lanterns brand quickly grew.
UNIFORMS
The Four Lanterns uniforms – brown and yellow – were also unique at the time. They were designed in London’s Bond Street as were the shop interiors and signage.
At its peak, the Four Lanterns had twelve shops in Dundalk, Drogheda, Castlebar, Sligo, Letterkenny, Buncrana and Donegal Town employing more than 350 people.
Today, they have five shops – in John Street, Sligo; Main Street, Buncrana; Lower Main Street and Port Road in Letterkenny and Quay Street in Donegal Town – with one hundred staff.
The Four Lanterns is a great example of a family run business, that has moved with the times and adapted to ever changing trends.
“We have people working with us whose grandparents started with dad in the early seventies. Paul Gibbons hung up the fryer for the last time in April after working with us here as manager in Letterkenny for 34 years. Ollie and Ann Doherty clocked up 78 years between them in Buncrana – they proposed to one another over the chicken fryer. They were part of a great team,” he smiled. 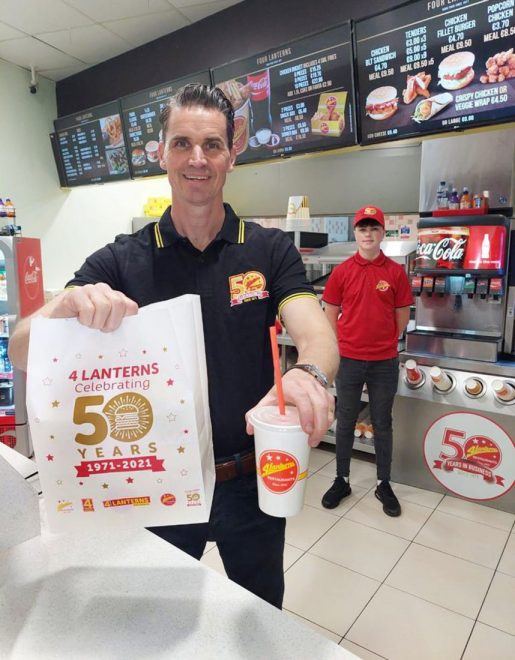 Oran Grimes and his son Jack celebrating 50 years of the 4 Lanterns.

CHARACTERS
Josie O’Donnell, Dessie Bond, Eddie Flynn, Sean Reilly, Rosie Bonner, Hugo Daly, Gareth Gorman and Mick Lagan are other names that spring to mind as he recalls some of the characters who have worked for the company over the past five decades.
“I can honestly say that I’ve had some of the best days in my life working in the Four Lights. We’re now employing the children and, in some cases, grandchildren of the people who worked with us in the seventies and eighties.
“Growing up I worked alongside a lot of my mates and it was the same for my brothers and sisters. Now many of our children are with us. Leigh (Sean’s son) manages the shop in Sligo while my youngest daughter, who is twelve, had her first shift in the shop last weekend.
“The Four Lanterns was the springboard for so many people. It gave them pocket money as sixteen year olds before they moved to college or jobs three or four years later.
“We tended to see people when they had lost their inhibitions at 3-o-clock in the morning and were willing to do anything. There were some things that I really didn’t want to see but, mostly, they were well behaved customers down through the years.
“I think we’ve created a proud legacy but we can’t afford to stand still. Eating habits are changing all the time. People are eating healthier and you see the likes of McDonald’s and other large corporations moving towards salads and meat free burgers.
“We’ll probably move in the same direction if we can source a supplier, at the right price, but there’s still a market out there for the Big 4 and Snack Box,” he said.
Unfortunately, three of the four Grimes brothers involved in the business – Frank, Vincent and Gerry – have since died.
“Paddy exited the business in the early nineties as did Gerry while Vincent ran the operation in Sligo while we looked after the North West. Last year, Vincent’s family approached us and asked would be interested in taking over and we jumped at the chance.
“This business isn’t for everybody but the five of us seem to work well together and we didn’t have to think twice. We’re proud and honoured to keep the business in the Grimes name,” he said.
Ten years ago, Kevin Grimes followed in his father’s footsteps when he won the Letterkenny Business Person of the Year award.
“We would like to thank all their staff and customers for their support and loyalty over the past 50 years and we look forward to serving the North West for another 50 years,” he said.
“Traditionally, we have supported local sporting events and local charities and it’s something that we’ll continue to do into the future,” he added. 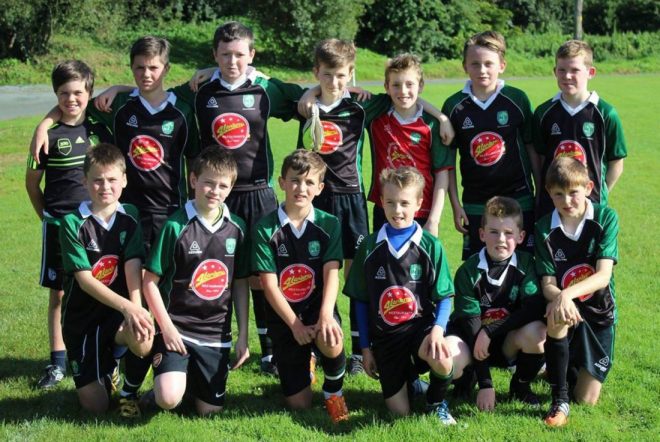 One of the many local teams who have been sponsored by the Four Lanterns over the years.