WE’VE all encountered raffle fundraisers – good-hearted members of the community going door-to-door to raise funds for charity.
But what about raffling your home?

For some who have struggled to sell their house on the conventional property market, online sites such as raffall.com have become the avenue of choice.

A UK platform, raffall.com is the first site of its kind that enables users to host raffles while at the same time enabling them to keep all of the revenue generated from ticket sales.

It is free to publish a raffle on the platform however a ten per-cent commission is charged on all ticket sales.

The commission charge though appears to be of little concern, particularly for those selling something substantial – a house, a Mercedes C-Class, a fortnight in a five-star luxury Spanish apartment.

For Irish ‘rafflers’ such a site is something of a Godsend as it allows them to circumnavigate some of Ireland’s gambling laws which, depending on the prize and the price of tickets, can require an application to the local district.

The Donegal News carried the story recently of the Gallagher family from Bruckless who decided to go down the raffle route. They contacted raffall.com and got them to sell tickets at £10 a time on their behalf, the prize being their farmhouse and £50,000 in cash. The lucky winners were Robert and Valeria Duncan who live in London and had no connection with the county.

Set to do the same shortly are Bryan and Lisa Gallagher who are raffling their four-bedroom home on Arranmore.

Like many, they previously tried to sell their home through more traditional channels but found no takers due to the pandemic.

“We had previously tried to sell but with the pandemic it was proving impossible. Raffling it seemed like an easier option,” said Lisa.

The couple contacted raffall.com back in February and explained their plans to sell their house with five per-cent going to Pieta House.
It has been far from straightforward though.

“You think it is going to be easy but it’s so hard. It’s 24/7 constantly on social media trying to get the word out there,” Lisa revealed. 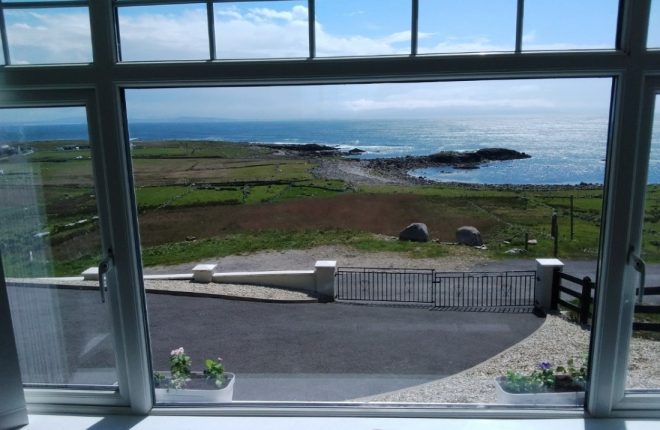 Stunning…A view out across the Atlantic from the house that is being raffled.

The couple say that ideally they would like to sell 30,000 tickets which would deliver a return of £300,000. After deductions and fees that would get them what the house is valued at. So far they have sold close to 13,000 but Lisa says she is confident their target will be reached.

What though of the risk factor? What happens if they come up well short of the 30,000 tickets?

“The bottom line is that if we didn’t hit it and we didn’t feel it was in our best interest to sell, there is an option for us to say no, we don’t want to let the house go. There will still be a winner and they will get 75 per-cent of the money raised up to that point with the rest going to raffall.com. The downside of course would be that the charity would not get its money.”

While initially a novelty – a new take on an ancient tradition – the raffle market has exploded over the past year. A quick glance at the first page of raffall.com shows that there are live draws for houses in East Cork, London and West Yorkshire.

“It is a crowded market and that’s why you have to put in the work,” said Lisa.

“For example we have had influencers out at the house doing bits and pieces. We have just had a drone video done. I work in a pre-school and basically I spend about four hours every evening on the internet just trying to promote our house. It’s constant and you feel like you are annoying people all the time trying to spread the word.”

Lisa said that if she could roll back the months and look at the situation with fresh eyes, she might have chosen a different route. But not necessarily so either.

“It would be a different answer every day. Some days when it is going well and you are getting different replies you think yes. But then you might send out 20 things and hear nothing back and you are left thinking ‘I don’t know where to go’.”

Online raffles do seem to follow a pattern – people talking about buying a ticket for months before actually doing so as the draw date approaches.

“I do think it will pick up although I don’t know what sort of panic I will be in come the week itself. It’s tiring but I kind of like the buzz of it too,” added Lisa.

The end date for the house on Arranmore is July 31 when someone will be chosen at random by the online company. Check out https://raffall.com/196090/enter-raffle-to-win-house-arranmore-island-donegal-hosted-by-bryan-gallagher for details.

Helping to bring the buzz back into Letterkenny

Letterkenny man through to final of Big DIY Challenge

Jack Murray on course to be new Donegal cathaoirleach

The mica protest in photos