HUGE crowds gathered outside the Convention Center in Dublin this afternoon to demand 100 per-cent redress for both homeowners affected by the mica and pyrite scandals.

Chants echoing the message ‘We want 100 per-cent’ could be heard along the Liffey as years of fighting for their homes to be repaired have
come to a head.

Politicians, affected homeowners and members of the Mica Action Group addressed the massive crowd that came out to support the cause.

Donegal TD Joe McHugh told protesters the mica motion due to come before the Dail later today will not be opposed by the government.

He said the government is going to take six weeks to try and come up with a solution to make the scheme accessible, affordable, and equal. He told the crowd that their voices have to be heard and said this is democracy in action. 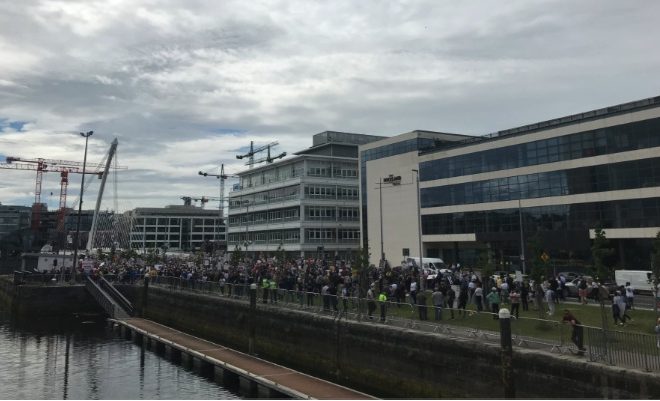 Some of the thousands of protesters who have gathered by the Liffey. The crowds are now on their way to Leinster House.

Thomas Pringle TD paid tribute to all those that made the journey down and said if the people of Donegal do not get 100 per-cent they will
come back in bigger numbers.

A host of other politicians spoke at the rally including People Before Profit TD Brid Smith who said she had not seen a protest of that size
in the city for a long time.

Aontu’s Peadar Toibin said a full investigation is needed to find out how this scandal happened.

Protesters have now made their way to Leinster House where the protest will continue.