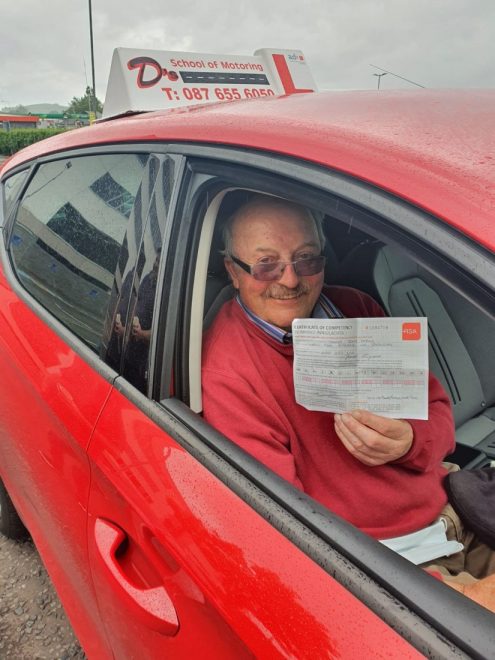 A PENSIONER who owned a provisional licence for more than fifty years is celebrating after finally passing his driving test.
Retired welder James Byrne (69), admitted he was thrilled when he passed his driving exam last week.
“I was absolutely delighted. It was a fantastic feeling,” he said.
Mr Byrne, from Narin Road in Ardara, is now encouraging other drivers on provisional licences to follow his example and sit the test.
“When I first started driving you never really had to think about licences. I was too busy rearing a family and working and allowed my licence to lapse and never took the time to renew it.
“I had to go through the system and started with the theory test. I then did twelve lessons with Diane (Harvey, Ds School of Motoring) in Killybegs. A lot of older people are nervous about learning to drive but luckily I managed to get the test first time,” he said.
“I’m seventy later in the year so it was a nice early birthday present to get. I’ll be able to take my wife Angela out for wee drives now,” he added.
A keen horseman, James will continue to use his lightweight, two-wheeled, sulky as a form of transport.
“I’ve two horse which I reared myself and I like to take them out on the road most days. I would normally go halfway up the road from Ardara to Killybegs. It keeps the horses in shape and it’s a great hobby for me. You get to meet some great characters,” he said.
Diane Harvey, Ds School of Motoring, said that she was so proud of James.
“He’s a pure gentleman and I am just so proud of this result. I’m over ten years in business and it’s never too late as James has shown. It’s the reason I just love my job,” she said.
“Like a lot of Irish people of his generation, James allowed everything to lapse and he had to start with the theory test in which he got 40 out of 40. He began his driver training with me in November 2020 but with lockdown the test didn’t happen.
“He’s now got his gift of independence and he was up with me today (Tuesday) with his wee van insured and ready to rock.
“James can now take his wife on a run up the road and not have to rely on other family members. With Covid you couldn’t car pool and I’m seeing a lot of more mature people realising that it is something that they too need to get done. It’s not just about being young on the road.

“I now expect to see James back over the next few months to complete the jeep and trailer towing test. He’s got the bug,” she laughed.